Posted on February 19, 2019 by Fictionophile

For me, this novel was the perfect storm. Setting, characters, and plot converged into a stellar read!

BLURB: The coastguard’s residence Chamber Cottage, which sits high up on the North Yorkshire cliffs, overlooking The North Sea, holds many dark secrets.
Alec and Peggy are struggling to overcome their marital problems. Both damaged by issues from their childhoods, they are trying to get on with their lives. But this is hard for them to do when they both believe they are being watched. As a result, Peggy, who has terrible scars on her face, becomes more agoraphobic.
To make matters worse, Peggy discovers her estranged mother is stalking both she and Alec, claiming she has a dark secret that is putting Peggy in danger.
What caused the scars on Peggy’s face? Is Alec really the monster Peggy’s mother believes him to be? And what secrets does Chamber Cottage hold?

The brief prologue of the novel portrays the fear, desperation, pain, and anguish of a woman who awakens to find that she has been buried alive! 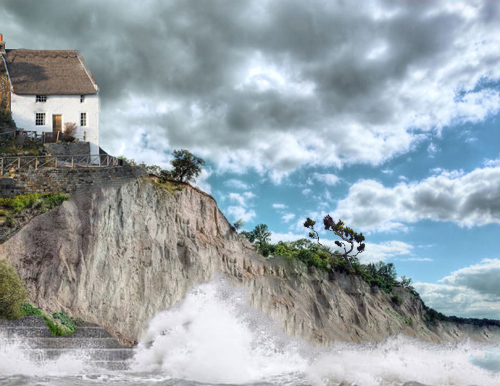 Chamber Cottage – built in the 19th century, it is perched on the top of a cliff in North Yorkshire overlooking the North Sea. Once an old coastguard’s cottage, it keeps its secrets and its dark history to itself.

Then, with the first chapters we are introduced to the various characters:

Peggy – 35, married, childless, and a crime novelist. Facially scarred, she displays many agoraphobic traits.  She works from home, in the atmospheric Chamber Cottage. Peggy has little social contact and is estranged from her mother and sister. Her many miscarriages have made her despondent and loathe to have any intimacy with her husband.

Alec – Peggy’s husband. Charming and handsome, he works as an assistant headmaster at a local school.  Alec had a horrific childhood. He was abused by his father and subsequently was put into foster care.  It becomes clear that both Alec and his wife had traumatic childhoods which have influenced them in a negative way. Now, their marriage is floundering.

Audrey – Peggy’s mother. A retired widow who drinks too much to assuage the guilt and despondency she feels at being estranged from her two daughters. She fills her empty days with alcohol, anger, guilt, and suspicion.

Maude – Peggy and Alec’s next door neighbour. Elderly and in the throes of advanced dementia, Maud’s moments of mental clarity are becoming few and far between…

Brenda – Maud’s adult daughter who lives with her and cares for her. By day she works as a nurse.  Tired both emotionally and physically, she returns home to wonder if even a portion of what Maud says is actually true.

Rachel – A bank cashier whose sister, Sheryl, has disappeared. As the days pass, she is becoming more and more concerned for her sister’s plight.

Then, about halfway through the book, we learn the identity of the woman who is buried alive.   But WHO put her there? WHY? And… which of the characters we have now come to know is responsible?

This novel has been on my TBR from the first moment I saw the great cover and read the review by Diane at Sweet Little Book Blog. I knew immediately that this book was exactly ‘my cup of tea‘, and I was right.  I LOVED IT!

Though old and damp, Chamber Cottage could quite possibly be my utopia of settings. I could hear the violent waves and the constant wind’s roar.

Told from various points of view, the reader is made privy to the thoughts of many different characters, all portrayed sympathetically. All engender the reader’s empathy on some level.

A sense of foreboding underlays the narrative in a subtle way. As insidious as the disgusting smell that emanates from the cellar of the cottage…

The ending was well executed with a suspenseful climax and realistic outcome. I did suspect the villain slightly ahead of time, but that in no way marred my enjoyment of the novel.

I plan to read ALL of J.A. Baker’s novels and will keep an eagle eye out for any new releases.

I purchased “Her Dark Retreat” in Kindle format. In my opinion, it was exceptional crime fiction. Highly recommended!

Born in Middlesbrough, North Yorkshire, Judith A. Baker developed a deep appreciation of literature and reading from a young age after being introduced to it by her parents. Weekly visits to the library were the norm and after being handed a collection of Edgar Allen Poe stories by her father, her love for the darker side of fiction slowly grew. She is an avid reader of all books but is drawn in particular, to psychological thrillers.
After many rejections (too many to mention!) her debut novel, Undercurrent, was published by Bloodhound Books in March 2017 and made it into the top 100 Amazon chart in both the UK and Canada. J.A. Baker is the author of five stand-alone thrillers, the latest of which The Uninvited was published in late 2018. She is currently working on her sixth novel, The Cleansing, due to be published April 2019.
J. A. Baker has four grown up children and lives in a village on the outskirts of Darlington with her husband Richard, and Theo, their barking mad dog.

13 Responses to “Her Dark Retreat” by J.A. Baker – Book Review