Today on Fictionophile, I am featuring an interview with J.S. Strange, the author of “Murder on the Rocks” a mystery series debut set in Cardiff, Wales. 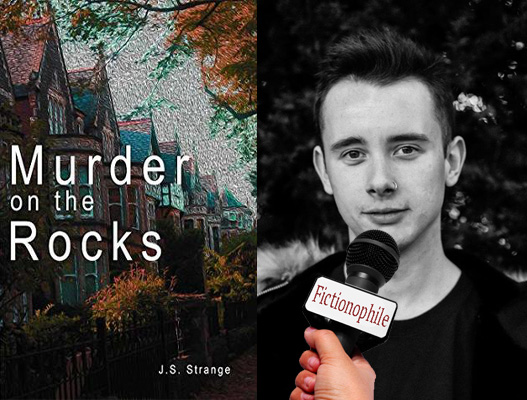 Murder on the Rocks was a rocky road to publication, if I’m being honest. I had heard of a mentoring scheme with Penguin Random House, called Write Now Live. I had Murder on the Rocks half written, and so I submitted the first chapter for consideration. If I got the mentorship, it would mean working with Penguin and learning with them for a year, and then possibly getting publication. However, there were only ten spaces, and I submitted and expected to hear nothing back. I then got shortlisted to the top 150, out of 1,700 applicants, and got to speak to a Penguin editor and hear feedback on Murder on the Rocks. It was invaluable. I didn’t get the mentorship, but afterwards, Murder on the Rocks was requested by seven publishers. However, I kept getting close, but eventually it was rejected, either because they had ‘already signed a gay male detective series, and there couldn’t be another one’ – a problem, when there are plenty of straight male ones – or they simply said ‘great story, but not quite for us’. It got very frustrating. Eventually, I managed to find Panther. They were Welsh, which attracted me to them, and they saw potential in the manuscript and instead of pushing me away, they agreed to work on it with me, which is what publishing should be about. They’ve been fantastic!

I’m so bad at keeping track of when I start things. I’ll say, ‘oh, it only took four months’, and then realise by people’s reactions that ‘four months’ was actually about a year. Murder on the Rocks did take about a year to write and redraft and get it in a good position ready for publication. I researched a few things, such as some crime procedures, although as I’m writing fiction, I knew some things wouldn’t be included. Sure, the story has to be plausible, but this is a fiction novel I’m writing. I don’t want to be writing complex reasoning behind things if it impacts the story. Maybe that’s the wrong attitude to have, though! I definitely researched a bit more on my second novel.

I had proof readers, BETA readers and then an editor go through the manuscript. Panther also suggested some changes. My family are normally too busy to read anything I write before it’s published.

I don’t live in Cardiff, but I work there, and I have spent a lot of time there. I live about forty minutes away from there. So I know Wales well, and know the area well. I do think it definitely helps a writer to know the areas and know the settings, especially when writing in the real world and the modern times, and trying to achieve that sense of realism. I don’t think it’s impossible to write a novel though in a location you’ve never been.

Before Murder on the Rocks, I was writing zombie novels. I grew up on horror, and then I wanted to write in the zombie genre. I had a series planned, about three of four, but after the second book, which kind of flopped, I hit a wall and struggled to write the third. I was in a massive writing block. Being an avid reader of crime and mystery, I decided to get out of that slump and try and give that genre a go. I’d been scared of writing in it because I didn’t think I could do it. But I needed to get out of that slump, and I needed to do that by writing something real. A part of me wanted to write a genre that was more accessible and commercial, if you will. So murder mystery it was. I’m glad I did it, because I found Jordan Jenner!

It’s really daunting starting a new series. My biggest fear is that I’ll hit a wall again. Though I’ve just finished the second novel in the series, and I’m hoping to have that published later this year. I’m excited about this series, because I think Jordan is quite a complex character, and one that I can have some fun with. I also think there is plenty of potential for some good mystery stories, too.

I published my first novel when I was 21. I’m 24 now. I think I started taking writing seriously, though, when I was sixteen. I knew it was something I wanted to get into.

His biggest fault is that he pushes people away, and he can be quite blunt and quite rude. He doesn’t mean to be. Readers have met him when he’s grieving in his own way, which doesn’t help. However, what I admire about him is he has a good intuition, and he’s kind. He knows who to trust, and he values those he has let in, and those he does consider to be a friend. He’s a shy guy, and he doesn’t have confidence in himself.

I haven’t had a dream about any of my characters, but I’ve definitely had dreams about their situations. Maybe as I’m dreaming them I’m the character, because they’re in my head and telling their stories through me!

I read a lot, and as much as I can. I recently got a Kindle, so I’ve started exploring ebooks and independent authors. I mainly read crime and thrillers, but sometimes I’ll read YA. Crime and thriller is definitely my go to genre, though.

I love the Harry Potter novels. The Rebus novels are ones I’ve started reading – a lot were published before I was born or could read – so I’m catching up. I also really like the Strike novels.

One hundred per cent it would be J.K. Rowling, or as she’s known in the mystery genre, Robert Galbraith. I’d also really like to sit and chat with Ian Rankin, too.

I really like C.L. Taylor’s novels. She writes psychological thrillers with sinister twists, and I really like them. I think she’s a great writer, and I always look forward to a new release from her. I recently discovered Val McDermid, too, and I think she has a great storytelling ability. There’s a reason she’s called queen of crime!

There are so many novelists out there that are underrated! There are many bubbling under the surface, getting an amazing following, and I’d love to get the same reaction that they’re getting. Some of those are Derek Farrell, who writes the Danny Bird Mysteries series. WD Jackson, who just signed with Panther, is a great writer, too.

17. “Murder on the Rocks” has a very attractive cover. Did you have any part in choosing the cover?

I actually designed the cover myself! I went to Cardiff with my friend, who’s a photographer, and we spent the day photographing Cardiff, and hoping we’d get a book cover out of it. I knew roughly what I wanted, and wanted to put my own personal touch on it. I wanted a real setting, but put my own spin on it by making it look like a painting.

Not being able to write full-time! There’s nothing worse than being unable to write when I really want to write! Also, not being known enough!

Normally I would say something about the cover, but you’ve covered that!

It has been my pleasure having you visit Fictionophile Jack!  I wish you every success in your career as a novelist and will be sure to watch for your upcoming novels!

“Murder on the rocks” can be purchased at Amazon.

Fiction reviewer ; Goodreads librarian. Retired library cataloger - more time to read! Loves books, gardening, and red wine. I have been a reviewer member of NetGalley since October 2013. I review titles offered by Edelweiss, and participate in blog tours with TLC Book Tours.
View all posts by Fictionophile →
This entry was posted in author interviews and tagged authors, Wales. Bookmark the permalink.