Posted on April 8, 2019 by Fictionophile 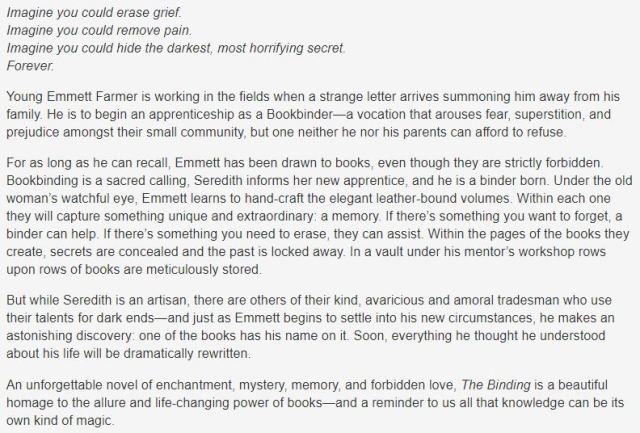 The time is sometime in the far Anglo-Saxon past. An imaginary time when the annual winter holiday was called “The Turning” and  a time when books were forbidden. So deplorable that the average ‘good’ citizen would not have them in their homes. It was also a time when families who felt shame of their loved ones would either put them away in lunatic asylums, or, send them to binders to be ‘bound’. 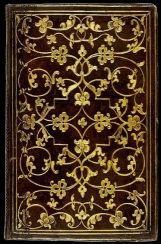 Part I – A farmer’s son, named Emmett Farmer goes to the country fair and uses his few shillings to purchase a beautiful object that he has never seen before. At first he thinks it is a pretty box, then he realizes that the box is filled with paper that is covered in words.  “the book fell open as he passed it to me and I couldn’t give it back. As soon as I saw the writing on the pages I understood: this was lots of pages all squashed together — like letters, lots of letters, only in a better box — and a story that went on and on.” He takes his treasure home.  His parents are appalled. He is punished and has his book taken away from him and buried.

Next we discover a slightly older, teenage Emmett. He has been suffering terribly from a mysterious illness. No longer really strong enough to labour on the family’s farm, he is shipped off to the remote marshlands to become an apprentice binder. He is not given a choice in the matter.  The decision to send him there confounds Emmett. Why would his parents want him to apprentice in the making of ‘books‘ when they are so condemned and despised by them?

how I imagined Seredith (art by Vlado Ondo)

The old bookbinder’s name is Seredith. She cares for him when he is ill. She teaches him her trade. She tells him that he is a “binder born”.  Seredith does not make books to sell. She takes pride in the craft and the dignity of making beautiful books, and she then keeps them safely locked up in her storeroom.

Emmett tries to understand, but is perplexed. He comes to accept his fate and he comes to love the old Seredith. Yet he does feel intense loneliness and is occasionally homesick for his family.

“It’s a sacred calling, Emmett. To have another person’s memory entrusted to you… To take the deepest, darkest part away from them and keep it safe, forever. To honor it, to make it beautiful, even though no one will ever see it. To guard it with your own life…”

Eventually he finds that books are really people’s memories. People come to the binder to have their memories erased. When they leave the binder’s house after being ‘bound’, they are left empty, with no memory of their former lives.  That is why his parents hadn’t wanted him to read a book. It was someone’s story.

Part II – Emmett is living back at the farm in the years previous to his living with Seredith.  He toils long hours in the fields, caring for the livestock, chopping wood, etc. One day while Emmett and his sister Alta are out for a walk, they meet a young man who saves Alta’s life when she falls through some thin ice. This young man, Lucian Darnay, will come to have a profound influence on both Alta and Emmett’s future lives.

Eventually, Emmett does something that is so shameful to his family that he sent (against his will)  to the binder to be ‘bound‘.

Part III – Lucian Darnay‘s story. The son of a wealthy and depraved man, he is betrothed to a woman and due to be married in just a few weeks.  Yet… something about his life feels missing. Then he learns that he has been ‘bound’ and he is then eager to get his ‘book’ back before his marriage.

“They’re full of promises, the binders, but if someone says something before you’ve had time to heal, you can end up knowing you’ve been bound. They say that’s the worst, when you don’t know what you’ve forgotten.”

The reason I chose to read this novel is obvious. It is about books. But not at all in the way I thought. What a difficult book to review. I’m not even sure how to classify the genre. Is is historical fiction, historical fantasy, supernatural, horror, a love story?  With elements of many different genres it is an amalgam of all of them.

With this amalgam of genres, I hope I can do this book justice. A fairly long read of 448 pages, it kept me enthralled throughout.  The book was written in three separate sections. The first, depicting Emmett Farmer when he lived with the old binder Seredith on the marsh, had an almost surreal quality. As if the reading was watching a film in slow motion through a distorted lens.  The second section of the book depicted Emmett’s recovered memories after his ‘book’ was burned in the fire. This section read like very well rendered historical fiction. The third section of the novel featuring Lucian Darnay had elements of suspense and tied the entire plot together. As all good novels should.

I think I’ll remember this novel for quite some time – but probably not for the reasons I would normally. It was a lengthy book that held my interest. It was exceedingly well written, and it was a genre that I don’t normally enjoy.  With themes of innocence and altruism, perversion and depravity, it will hold appeal for countless readers. The historical aspect of the novel highlighted the chasm between the social classes and the eternal problem of powerful people preying upon those who are vulnerable.

All in all, I really enjoyed this reading experience and would recommend this book. Readers who enjoy historical fiction, and historical fantasy fiction will be most enthralled by Bridget Collins debut adult novel.

I received a complimentary digital copy of “The Binding” from William Morrow/HarperCollins via Edelweiss.  This novel will be available to purchase on April 9, 2019 in Canada, and on April 16th in the U.S. and is available for preorder now.

Bridget Collins was born in England in 1981. She trained as an actor at the London Academy of Music and Dramatic Art after reading English at King’s College, Cambridge. She is the author of seven acclaimed books for young adults and has had two plays produced, one at the Edinburgh Fringe Festival. The Binding is her first adult novel.

27 Responses to “The binding” by Bridget Collins – Book Review