“Block 46 is the antechamber to death”

Originally written in French, it is brilliantly and seamlessly translated by Maxim Jakubowski.  The blurb:

In Falkenberg Sweden, the mutilated body of a talented young jewelry designer Linnéa Blix is found in a snow-swept marina. In Hampstead Heath, London, the body of a young boy is discovered with similar wounds to Linnéa’s.

In Buchenwald Concentration Camp in 1944, Erich Ebner will do anything to see himself as a human again.

Are the murders the work of a serial killer, and how are they connected to the gruesome and barbaric events at Buchenwald?

Emily Roy, a profiler on loan to Scotland Yard from the Canadian Royal Mounted Police, joins up with Linnea’s friend, French true-crime writer Alexis Castells, to investigate the puzzling case. They travel between Sweden and London, and then deep into the past, as a startling and terrifying connection gradually comes to light.

Plumbing the darkness and the horrific evidence of the nature of evil, Block 46 is a multi-layered, sweeping and evocative thriller.

This book introduces a female investigative pair. Emily Roy is a profiler with the Canadian R.C.M.P., currently seconded to Scotland Yard. She teams up with Alexis Castells, a true-crime writer, to investigate a barbarious series of crimes with links to the past.

When jewelry designer Linnéa Blix fails to show up at a Cartier event showcasing her work, her friends know that something serious must have occurred.

Her friends, including Alexis Castells, travel to Sweden. When they arrive, they meet the police team headed by Lennart Bergström,  as well as Linnéa’s neighbours, one of whom is Stellan Eklund who becomes an important figure in the life of Alexis Castells.

The profiler, Emily Roy carries a tiny black box with her at all times. She occasionally peers into it when she is alone. What could possibly be its significance?

The murders of the young boys in London closely resemble the murder of Linnéa Blix. What could possibly connect them? What links the northern London, and the western Swedish kill sites? And, more importantly, how could the story of a man incarcerated in a Nazi concentration camp possibly be connected to the serial killer story?

I’ve had this novel on my TBR for some time now and I’m SO happy that I finally got a chance to read it. WOW! The epilogue states that the author’s grandfather was an inmate in Buchenwald concentration camp, and that he played a part in the liberation in April 1945. This book is an outstanding tribute to him and his comrades.

The cover.  This is part serial killer/crime thriller and part historical/holocaust fiction. Whoever designed the cover captured both elements perfectly.

The writing. Told in brief chapters, there were three well-constructed narratives running throughout this novel. The present day serial killer investigation, the historic Buchenwald story of Erich Ebner (German medical student turned Nazi prisoner), and, a third which was narrated by the serial killer (thankfully his sections were short).

The characters. There were quite a few different characters in the book, but I had no trouble discerning who was who. All were clearly defined, yet the two protagonists, Emily and Alexis, seemed to be holding back secrets. Perhaps these secrets will be explored more fully in future novels.

Emily Roy, in particular, was an enigma. A Canadian, seconded by Scotland Yard, she is a driven criminal profiler.  Although she can interview victims with empathy and compassion, her co-workers find her brusque to the point of rudeness. They find her to be cold, with a misanthropic attitude.

My only quibble. Emily and Alexis had met three years prior to the events in this book, which is the only attempt the author makes to explain why Alexis, a true-crime writer, is given almost free reign in the investigation and is made privy to all the evidence. She is an integral part of the investigation, but I’m still not sure why she was granted such access. Surely her friendship with a visiting criminal profiler would not normally do so?

The settings. The scenes set in Sweden painted a vivid picture of the bone-chilling cold, the scrumptious food, and the housing styles. The scenes in Buchenwald were horrific, barbaric, atrocious, and depressing. Dark, harrowing, and graphic, they could possibly deter some readers from appreciating the book. But these things really DID happen, and it is important for us in this cossetted age to realize the true meaning of ‘inhumanity to man’.

The serial killer. He refers to “The Other”. Does he have a partner in crime? Is he delusional? As is all good thrillers, the identity of the killer was not revealed until the end of the book. And yes… I was surprised by who it turned out to be.

The twist. Yes there certainly was one. But being the non-spoiler type of reviewer I am, I couldn’t possibly ruin it for you.

I am very happy to know that a sequel to this novel (“Keeper“) is available, and I very much look forward to reading it. Emily Roy and Alexis Castells together again.

Highly recommended to those readers who enjoy thrillers with a visceral punch. It was a fast-paced, chilling, and memorable novel.

My gratitude goes to the publisher, Orenda Books, for generously providing me with a digital copy of this novel for review. 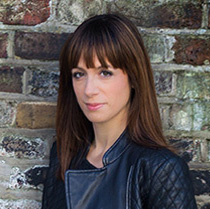 Born in Marseille, France, and with a degree in Political Science, Johana Gustawsson has worked as a journalist for the French and Spanish press and television. Her critically acclaimed Roy & Castells series, including Block 46, Keeper and, soon to be published, Blood Song, has won the Plume d’Argent, Balai de la découverte, Balai d’Or and Prix Marseillais du Polar awards, and is now published in nineteen countries. A TV adaptation is currently underway in a French, Swedish and UK co-production. Johana lives in London with her Swedish husband and their three sons.