Posted on October 3, 2019 by Fictionophile

Vastly successful in her day, Margaret Millar has now largely fallen out of popular consumption. Her psychologically complex thrillers have some of the best realised characters and most emotionally brilliant writing of all twentieth century crime, earning her a stream of praise from fellow writers. However, the world seems to have forgotten her. Until now.

Pushkin Press are determined to revive Millar. And not only that, they want to shine a spotlight on the forgotten female crime writers of the past two centuries, where strides in both the genre and in women’s writing have taken place. 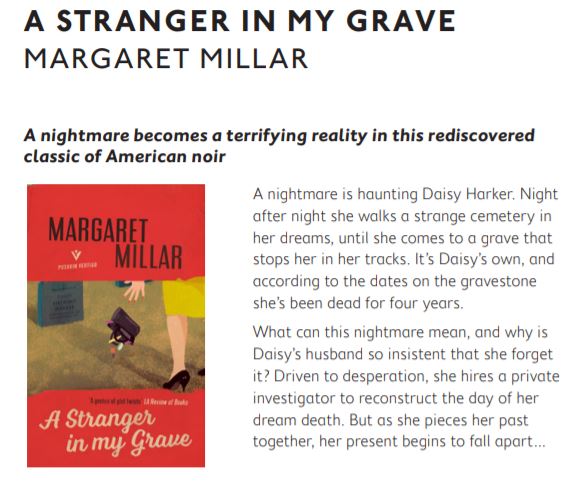 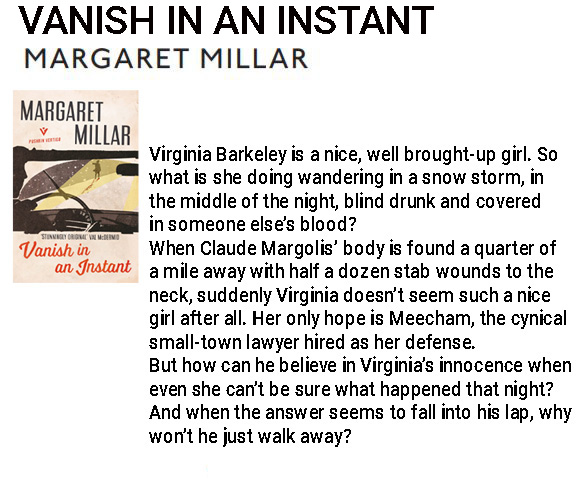 I’m ashamed to say that I haven’t read any of Millar’s work. Given that she is a Canadian, award-winning mystery novelist, I feel that this must be remedied soon. Pushkin Press kindly provided me with copies of the above three Millar novels and I hope to read and review them in 2020.

Have YOU read any of Margaret Millar’s novels?

Margaret Millar (1915-1994) was the author of 27 books and a masterful pioneer of psychological mysteries and thrillers.
Born in Kitchener, Ontario, she spent most of her life in Santa Barbara, California. She was married to the writer Kenneth Millar (better known under the pen name Ross Macdonald).

Her 1956 novel Beast in View won the Edgar Allan Poe Award for Best Novel.
In 1983 the Mystery Writers of America awarded her the Grand Master Award for Lifetime Achievement.

‘Margaret Millar is surely one of late twentieth-century crime fiction’s best writers, in the sense that the actual writing in her books, the prose, is of superb quality. On almost every page of this one there is some description, whether of a physical thing or a mental state, that sends a sharp ray of extra meaning into the reader’s mind.’ – H.R.F. Keating

‘In the whole of crime fiction’s distinguished sisterhood, there is no one quite like Margaret Millar.’ – Guardian

‘One of the most original and vital voices in all of American crime fiction’ – Laura Lippman, author of Sunburn