Introducing… “You Beneath Your Skin” by Damyanti Biswas #YouBeneathYourSkin @damyantig

Posted on October 6, 2019 by Fictionophile 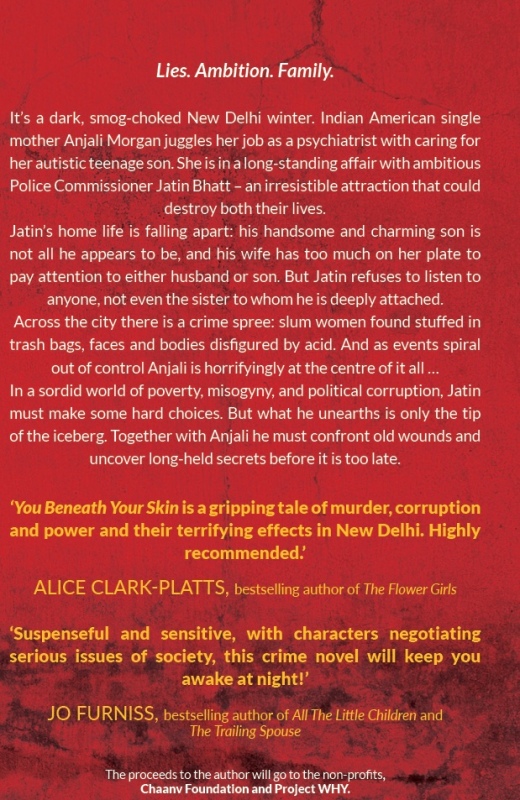 All the author proceeds will go to Project WHY and Stop Acid Attacks.

You Beneath Your Skin is a crime novel about the investigation of an acid attack on a woman from Delhi’s upper class, set against the backdrop of crimes against underprivileged women. They are assaulted, disfigured with acid, and murdered.

While the framework is that of a thriller, the novel threads together different narrative strands. The author tackles various social issues: crimes against women and why they occur, the nexus between political corruption, police and big money; the abuse of the underprivileged, be it adults or children.

Of these the issue of crimes against women is the strongest—why do men attack women? Why do they gang together? What happens when a woman tries to break the glass ceiling? Can toxic masculinity masquerade as benevolent patriarchy?

Parents would also find this novel fascinating: how do you bring up a good human being in today’s troubled times? How much do you know of your teenager’s life? If you’re the parent of a special child, what challenges do you face and what sort of support can you expect?

It is a  whodunnit, but also a whydunnit, because violent crime unravels those affected: the people, the relationships, the very fabric of society, and we get a glimpse of what lies beneath. That’s why the title, You Beneath Your Skin.

The narrative of the book was researched and shaped during the author’s work with Project WHY, and some of the experiences generously shared by acid attack survivors from the non-profit Stop Acid Attacks. To return this debt of gratitude, all author proceeds from the book will go to these two non-profits.

Damyanti Biswas lives in Singapore, and works with Delhi’s underprivileged children as part of Project Why, a charity that promotes education and social enhancement in underprivileged communities. Her short stories have been published in magazines in the US, UK, and Asia, and she helps edit the Forge Literary Magazine. You can find her on her blog and Twitter.

Damyanti Biswas volunteers for the non-profits, Project WHY and Stop Acid Attacks. She speaks passionately on the subjects of gender, violence, and poverty. The narrative of Damyanti’s new novel, You Beneath Your Skin (Simon and Schuster) releasing this September, has been shaped by her years of interaction with women and children in these two organisations. Using a framework of a crime thriller, she conjures in this book an authentic portrayal of poverty, misogyny, and political corruption.

Project WHY’s journey began in 2000 with 40 children who wanted to learn spoken English and a handful of volunteers. Over the years, as the number of children increased, their demands multiplied, new teachers were discovered within tiny jhuggis and lanes, and ad-hoc classrooms found. They started their first after-school support programme at Giri Nagar for children coming from underprivileged homes, and today through seven after-school support centres, they reach out to over 1100 children, 200 women and have created 50 job opportunities for people from the community. Their aim is to bridge the education gap for underprivileged children and improve their learning outcomes in a safe environment, as well as life-skills and all-round development for women.

Stop Acid Attacks (SAA) is a campaign against acid violence. This organisation has been actively campaigning for the cause of acid attack survivors by continuously creating dialogue with the political and legal system, to bring about a social change. The survivor of an acid attack requires immediate medical, financial and psychological support on human grounds. But, the judicial procedures in this country do not assure any such intervention or help to the survivor until a court announces it. It is this loophole in the procedure of justice that they work on, by generating immediate medical and final support for the victims and providing them and their families the needed psychological and legal support. Using the visual medium, and engaging with their supporters worldwide through social media and the internet, they aim to sensitise and educate people about the gruesome nature of this crime, and the oppressive injustice of a gender-biased society.

Damyanti’s dedication to both the causes has led her to ensure that her proceeds from the book You Beneath You Skin go to Project Why and Stop Acid Attacks. Earlier drafts of this novel were long-listed for the Mslexia Novel Competition and the Bath Novel Award, and the writing was helped by a grant from the National Arts Council of Singapore. Damyanti’s short stories have been published in anthologies and journals around the world, including Litro, Griffith Review, Bluestem and others. She’s also one of the editors of the Forge Literary magazine.

Fiction reviewer ; Goodreads librarian. Retired library cataloger - more time to read! Loves books, gardening, and red wine. I have been a reviewer member of NetGalley since October 2013. I review titles offered by Edelweiss, and participate in blog tours with TLC Book Tours.
View all posts by Fictionophile →
This entry was posted in Authors and tagged authors, India. Bookmark the permalink.