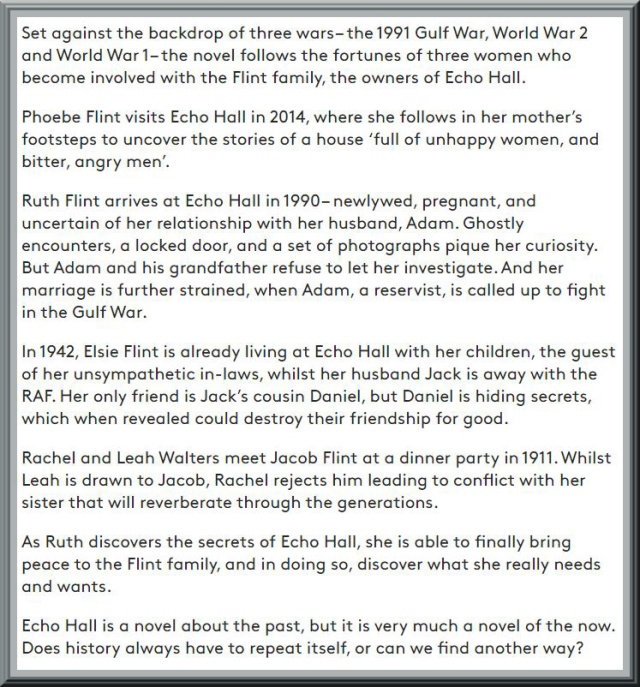 2014 – The story opens with a young woman, Phoebe Flint, visiting a stately home on the English/Welsh border which is open to the public. Though she has paid to enter the building, this is, in fact, the house where she was born. A house which has witnessed much unhappiness, and many family secrets.

Echo Hall is located within walking distance of Arthur’s Stone. This infamous neolithic rock plays a part in the lives of all the women who reside in the gloomy old manor house. 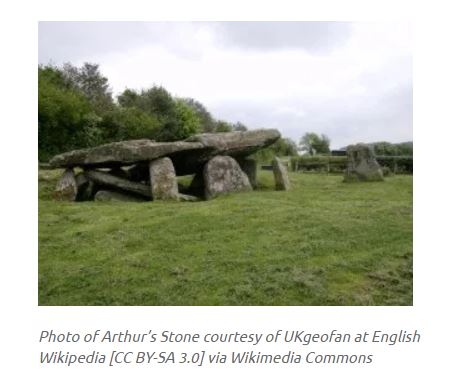 Then, we travel back in time to Phoebe’s mother’s story, telling of how she came to Echo Hall as a pregnant newlywed shortly before her husband Adam Flint was called up to fight in the Gulf War.  The remote and chilly Echo Hall does not welcome her and she misses her work. Her husband’s grandfather, Jack seem to be hiding something…

The Flint family fortune was founded on a slate quarry. A codicil was written into the deeds of the house that sons can only inherit the quarry if they are married and live in Echo Hall with their wives and children.

Echo Hall is aptly named for two reasons. 1) when standing near Arthur’s Stone, the valley acts as a natural echo chamber, and 2) the house reverberates with the echoes of the memories of previous residents.

I read a digital copy of the book and was wishing that it had come with a genealogical chart. It would be interesting to see the Flint family tree and helpful with keeping the timelines straight in your mind. Perhaps there is one included in the paper book, I’m not sure…

The depiction of how war affects the Flint family over the generations was very moving. Three generations – three wars…

This is a meandering family saga filled with loves, losses, betrayals, infidelities, childbirth, death, and, overriding it all, WAR. A few of the characters were a part of the Quaker faith and were very anti-war. Their views plays an integral part of the story. Also predominant was a feud between two sisters. A conflict so serious that it affected future generations.

Always a sucker for an old house teeming with history, I couldn’t help but enjoy “Echo Hall“. The inhabitants over the years suffered and loved in equal measure. Their story was overwhelmingly tragic, yet their lives were both fascinating and intriguing.

I would recommend this novel to those readers who enjoy historical fiction and inter-generational family sagas. A well rendered debut!

I received a complimentary digital copy of this novel from Unbound via NetGalley.

Virginia Moffatt was born in London, England and now lives in Oxford. She has been writing all her life, but only started taking it seriously in 2004, when at nearly forty years of age she realized that if she didn’t start then she never would. Since then she has gained a diploma in creative writing, attended several writing courses and workshops and written two novels, a collection of flash fiction, edited an essay collection and written a Lent course as well as writing short stories and articles. “Echo Hall” is her debut novel. Her second novel, ‘The Wave’ will be published in 2019, and she is currently working on her third.