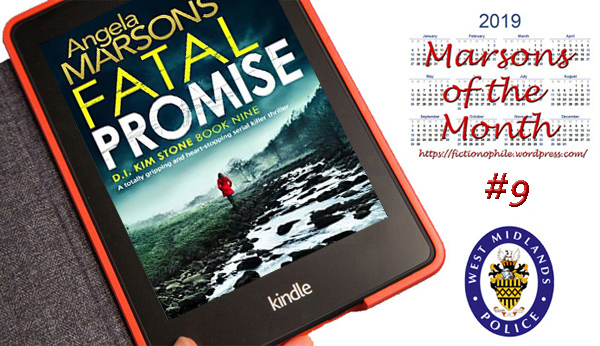 Confession though…. as this is the 9th novel in the series, I SHOULD have read and reviewed it in September – I’m a month behind. Woe is me…

Her team respect her and are very loyal. And no wonder – Kim never asks her team members to do anything that she would not do herself. She is fiercely protective of people she cares about and has an overriding passion for her job.

D.S. Bryant, twelve years her senior, is Kim’s partner and dearest friend. Devoted to his wife and daughters, Bryant is the glue that holds Kim’s team together.  Their banter is a delight to read.
“How’s the leg?” he asked, taking his seat. “Not bad,” she answered, on safer ground. “But you’ll be happy to know I can’t drive.” I already know that, Guv. Oh sorry, you meant you’re not allowed to drive. My mistake.”
In this novel, Bryant is feeling shut out by Kim because she won’t share her grief about the loss of Kevin Dawson from their tight-knit team.
Constable Stacy Wood, a diligent and hard-working local girl who excels at online research and data-mining which is often invaluable to the team’s success. Stacy is taking the loss of Dawson very hard. This time out Stacy is working on the case of a missing teenage girl, Jessie Ryan.
D.S. Austin Penn, is the newest member of the team but not a complete stranger as he has worked with them twice before for short terms. He gets a cold reception to his new team as they are all resentful of his presence there because they miss Kevin Dawson.
D.C.I. Woodward (Woody) is Kim’s long-suffering superior. Like the rest of her team, he is loyal and stands up for her when the higher-ups would have her removed from the case. This time out Woody is very concerned about whether Kim is fit both mentally and physically to return to work.

Kim meanwhile as stoic as ever, pushes through the pain of her leg injury and avoids coming to terms with the tragedy which took place at the end of the previous book.

In DI Kim Stone’s ninth outing, Kim has just returned to work after a six week absence in which she was recuperating from her injuries sustained at the end of the last book. Picking up right where she left off, her first case back is related to the one in the previous book. Doctor Cordell (connected to the prestigious Heathcrest School) has been murdered. Cordell was a member of the secret society “The Spades” which featured greatly in the last book.

Then, there are three more murders, all connected. Kim and her team must discover the murderer before more people are victimized.

I must say that this book’s plot was diabolically clever and the characters are becoming more and more like family to me. The series just seems to go from strength to strength. I highly recommend though that this series be read in order to fully realize its brilliance.

“Fatal Promise” is ultimately a novel of misplaced revenge. It explores how the loss of one person can affect so many others in such profound ways and how emotional pain is manifested so differently from person to person.

As I devoured this ninth novel in the series, I felt certain that this entire series is one I will certainly recommend to all lovers of gritty crime fiction. Lucky for me I purchased the entire series in order that I might read one installment every month for my “Marsons of the Month” blog series. I look forward to reading the tenth book, “Dead Memories” in November. Oh, and in case you didn’t already guess… “Fatal Promise” is very highly recommended by me.

Fiction reviewer ; Goodreads librarian. Retired library cataloger - more time to read! Loves books, gardening, and red wine. I have been a reviewer member of NetGalley since October 2013. I review titles offered by Edelweiss, and participate in blog tours with TLC Book Tours.
View all posts by Fictionophile →
This entry was posted in Book Reviews, Mystery fiction and tagged crime fiction, England, Marsons of the month, police procedurals, recommended reading. Bookmark the permalink.