Posted on November 16, 2019 by Fictionophile 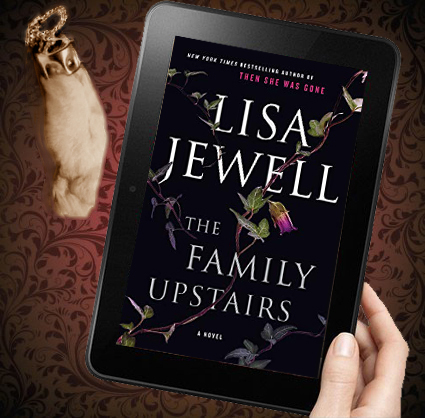 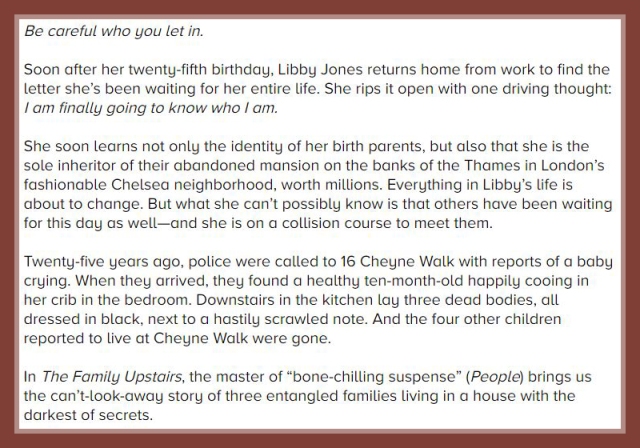 A wealthy young family own a mansion in a desirable Chelsea neighbourhood. As their affluence wains, they eventually invite another family in – supposedly as a temporary measure. The patriarch of this family has other plans however. This family upstairs will eventually become toxic to all involved.

“I was nearly eleven when they came, and my sister was nine. They lived with us for more than five years and they turned everything very, very dark.”

Both families have two children, a boy and a girl each. The younger girls, Lucy and Clemency, become fast friends. The elder boys, Phinn and Henry, however do not. Although, it has to be said that one of the boys is absolutely obsessed with the other. More than a natural teenage obsession – as we come to find out.

“And when I was sixteen, and my sister was fourteen, the baby came.”

Adopted as a baby, Libby has just turned twenty-five when she gets a letter from a solicitor. It seems that she – a girl who sells custom kitchens – has inherited a multi-million pound mansion in Chelsea which has been vacant for over twenty-four years.

She learns that this is where her birth-parents lived – and, this is where she was found. While three adults lie dead on the kitchen floor downstairs, she was a happy, healthy baby who was found in her crib upstairs with only a rabbit’s foot as company.

She does some investigation and finds an old newspaper article titled: “The Mysterious Case of Serenity Lamb and the Rabbit’s Foot“.  It would seem that she, Libby Jones, is actually Serenity Lamb.

Libby contacts an investigative journalist who helps her unravel more of the mystery of her early life.

When I open a book by Lisa Jewell I know that I’m in for a rewarding reading experience. “The Family Upstairs” was an engrossing psychological thriller.

The first chapters of the book were a tad confusing as there were a lot of different characters introduced – some of them going by more than one name. Once I got the characters straight in my head it was pure enjoyment from then on.

The events that took place in that Chelsea mansion were disturbing and unforgettable. All the more memorable because it was so plausible. You hear about such happenings in the news.

Told via dual timelines, and from three perspectives, the story came alive. Libby, Lucy, and Henry each add a viewpoint that fully rounds out the narrative. Lucy’s story was particularly poignant.

The characters were well drawn and some of them were quite chilling. There was a pervading sense of menace emanating from the David Thomsen character.  The descriptions of the house, and what went on there, were vivid so as to make the reader transported to the scene.

And the ending, well it was very satisfying, though as with many thrillers, I found myself with goosebumps after the final line…

Highly recommended to all those who enjoy an expertly crafted psychological thriller. Lisa Jewell never disappoints.

This review was written voluntarily and my rating was in no way influenced by the fact that I received a complimentary digital copy of this novel from Atria Books/Simon & Schuster via NetGalley.  ISBN: 9781501190100     352 pages

Links to my reviews of some earlier titles by Lisa Jewell:

“Then She Was Gone“

“The Girls in the Garden“

She has since written a further ten novels, as is currently at work on her twelfth.

She now lives in an innermost part of north London with her husband Jascha, an IT consultant, her daughters, Amelie and Evie and her silver tabbies, Jack and Milly.

Fiction reviewer ; Goodreads librarian. Retired library cataloger - more time to read! Loves books, gardening, and red wine. I have been a reviewer member of NetGalley since October 2013. I review titles offered by Edelweiss, and participate in blog tours with TLC Book Tours.
View all posts by Fictionophile →
This entry was posted in Book Reviews, NetGalley, Psychological thrillers and tagged England, recommended reading, thrillers. Bookmark the permalink.