Posted on November 27, 2019 by Fictionophile

Lucas Radcliffe has written a best-selling horror novel. Since the accidental death of his girlfriend, his writing has been therapeutic, a way to momentarily forget his loss. Now his publisher is waiting for another bestseller – only there is one small problem. Lucas is suffering from writer’s block. As a way of overcoming his block, he decides to go to Wales where he has agreed to live at a writer’s retreat. Coincidentally, the retreat is very close to the small town where he lived as a child.

The retreat is a large, white painted stone house called Nyth Bran. It was once the site of a slate mine – something which was a major industry in North Wales.

When he arrives, he meets the other writers and the attractive proprietor, Julia, who lives alone in the house with her ginger cat, Chesney.  She has also suffered a great loss, her husband drowned two years ago, and even worse, her young daughter disappeared that day too. The police think that young Lily drowned along with her father yet unlike him, her body was never found. Julia refuses to believe that Lily is dead. It is only this hope that keeps her sane and functioning.

Lucas goes for walks in the nearby wood to gain inspiration for his new horror novel. He finds an old stone hut that would make perfect fodder for his novel.

Once ensconced in the retreat, Lucas and some of the other writers begin to experience strange and eerie events. They hear a childlike singing within the walls. Items disappear. Voices are heard…  Lucas, unlike some of his fellow residents, does NOT believe in the supernatural even though there seems to be no other plausible explanation…

Though he finds himself in the perfect setting to work on his book, Lucas is distracted by Julia’s story. Could her daughter still be alive? He begins to investigate…

This is not the first novel I’ve read by Mark Edwards, but it has confirmed the notion that I will be avidly following this author in the future. I was completely immersed in “The Retreat” and found it to be quite the page-turner.

That is not to say that it wasn’t over-the-top at times, but strangely, in this case, it did not in any way detract from my enjoyment of the novel. I guess it was the perfect storm of plot/characters/setting. There was a pervasive sense of malice lingering throughout the narrative. 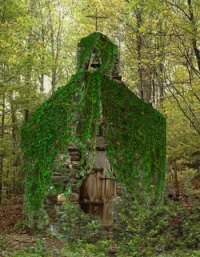 Vivid descriptions of the North Wales locale portrayed a setting that was absolutely dripping with atmosphere. The story was unsettling, mysterious, sinister, and downright creepy in places, though the character of Lucas was level-headed and refused to believe that the bizarre events surrounding him had any basis in superstition.

Interspersed throughout the novel were chapters from young Lily’s point of view in the days leading up to her disappearance.

The ending chapters explained the mystery in a satisfactory way though it also had its creepy factor – a crucial plot device in a thriller. The book speaks to the immense power of superstition and irrational beliefs that are passed down from generation to generation.

This is a novel that would be a great read on a dark and stormy night. The stuff that nightmares are made of….  Readers will enjoy this great amalgam of suspense, paranormal, horror, and mystery. Highly recommended!

Rated 4.5 stars – rounded up to 5 stars for NetGalley, Amazon and Goodreads.

This review was written voluntarily and my rating was in no way influenced by the fact that I received a complimentary digital copy of this novel from Thomas & Mercer (an imprint of Amazon Publishing UK) via NetGalley.

Mark Edwards is the author of psychological thrillers, each of which concerns ordinary people who encounter terrifying events, and police procedurals with Louise Voss. Edwards lives in Wolverhampton, England.

In 2010, Mark was given a Kindle. Around the same time, he read about some writers in America who were having success self-publishing. Some of them had even gone on to get traditional book deals.

So Mark decided to self-publish a solo book he had written years earlier, The Magpies. Following its tremendous success, Thomas & Mercer, Amazon’s crime fiction publishing company, made him an offer he couldn’t refuse. Because She Loves Me, his first book with Thomas & Mercer, was also a bestseller. T&M are also now publishing Mark’s books with Louise Voss, and he is finally a full-time writer.

11 Responses to “The Retreat” by Mark Edwards – Book Review