“The Boatman: and other stories” by Billy O’Callaghan – Book Review

“Everyone has to decide for themselves what happiness looks like.” 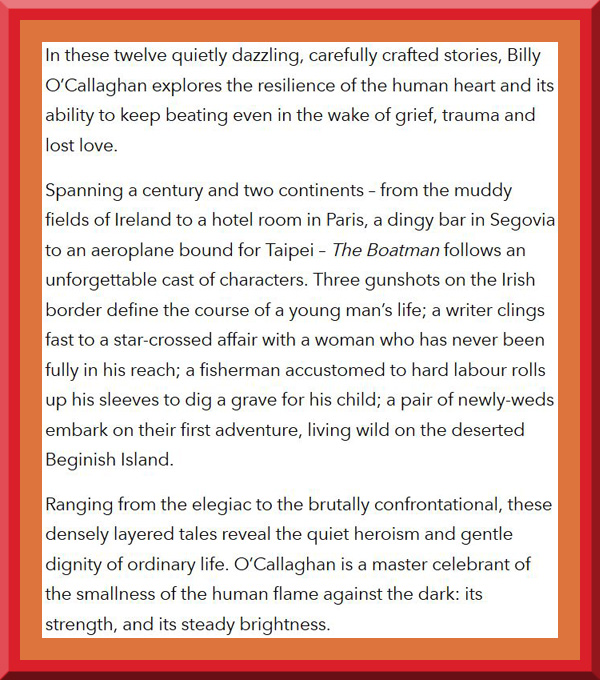 Twelve outstanding and often poignant stories from one of Ireland’s master storytellers. The stories cover a wide range of topics, but many deal with tragic situations, regret, death, and loss.

My favourite story in the collection was “Beginish“, a tragic tale that because of its imagery, will remain with me for a long, long, time.

When I find myself constantly highlighting passages when I am reading, I always know that I’m indulging in high quality, literary fiction.

Highly recommended to all those who enjoy reading meaningful prose in a short story format.

Some of my favourite quotes from this collection are:

“Everyone is marked in permanent ways, and those marks make us ugly to some eyes but they don’t stop us from living.”

“Everything that has gone before seems redundant now, all the efforts at survival, the love, the wasted laughter.” “Because in the end there’s always death, and always broken hearts. Happy stories, at least, get to hold the air of magic.”

“I always have an old paperback in my pocket. It’s about filling the spare moments, I think, blocking out the spaces between acts.”

“Our surroundings are there as we perceive them, and our dead are at once gone and everywhere.”

“When you don’t fear death then you fear nothing. Except living. And when you can simply exist, in full acceptance of your lot, then you are immense. Fear is what brings us down and makes small things of us.”

“Regret, we’d both come to realise, was a far greater burden to bear than guilt. Guilt hadn’t the permanence of regret, and could be kissed and laughed away.”

“So much of life is waiting, but even ruined as we are, waiting at least makes room for dreams.”

“There are times when denial is the only protection available to us.”

“Life is always hard, isn’t it? No matter what you get, there’s always some precious piece either missing or soon to be taken away.”

“We’re sponges, really. We soak up everything that happens, everything that’s said and done and everything we see and hear, and we hold it in our hearts. And that can be a lot to bear. Ignorance is too often the better and easier bliss.”

“The passing years are supposed to soften what has gone before, but they don’t. Because for most of us, the past has nowhere to go. The best we can do is live beneath its weight.”

This review was written voluntarily and my rating was in no way influenced by the fact that I received a complimentary digital copy of this novel from HarperCollins via Edelweiss.     ISBN: 9780062856593 –  ASIN: B07QG5D4YF   240 pages

Billy O’Callaghan was born in Cork, Ireland, in 1974, and is the author of three short story collections: ‘In Exile’ (2008) and ‘In Too Deep’ (2009), both published by Mercier Press, and ‘The Things We Lose, the Things We Leave Behind’ (2013) published by New Island Books, which won a Bord Gais Energy Irish Book Award and which is forthcoming in a Chinese translation from CITIC Press in the summer of 2017. His first novel was “The Dead House” and his most recent novel “My Coney Island Baby” was published by HarperCollins and is available now. His stories have been broadcast nationally on RTÉ Radio’s ‘The Book on One’​, Sunday Miscellany and the Francis MacManus Awards series, and have appeared in more than 100 magazines and literary journals around the world.

13 Responses to “The Boatman: and other stories” by Billy O’Callaghan – Book Review