We meet the Skelfs on the day that they are saying goodbye to their patriarch, Jim. They are doing this in a somewhat bizarre way. Though they run a funeral home, they are having an illegal funeral pyre in their backyard – as requested by Jim…

Jim’s passing greatly affects those he has left behind.  For one thing, the business must go on and the fact that the family are surrounded by death on a daily basis makes the loss of Jim even more poignant.

“Maybe life is just a succession of diversion tactics, moments to keep you busy, stop you thinking about the big stuff.”

The Skelfs have two businesses which they run out of their large Victorian house in Edinburgh. They run a funeral parlour AND a private detective agency. 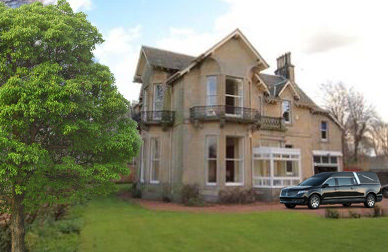 Now that Jim has passed away, it is up to the three strong Skelf women to carry on his legacy.

Dorothy Skelf – 70 years old and Jim’s widow. She grew up in California, but has lived in Edinburgh for the past fifty years as Jim’s wife and business partner. She is very fit for her age due to her love of yoga and her passion for playing the drums.

Jim’s passing has left her reeling. Apparently Jim had kept secrets from her, and now she is unsure of everything. She had thought that they shared everything, but now… she doesn’t know what to think.  Grieving, and feeling betrayed by her husband’s lies, she enlists her friend Thomas, who just happens to be a policeman, to help her discover just what Jim was up to for all those years.

Jenny – Jim and Dorothy’s daughter is a divorcée in her early forties. A freelance journalist, she finds out that she has lost her job on the day of her father’s funeral.  With rent to pay, she reluctantly joins the family firm. She hasn’t lived at home for twenty-five years, and she finds the adjustment is a challenge. She works more on the private detective side of the business than the funeral side.

Hannah – Jenny’s daughter and Dorothy’s granddaughter, is 20 years old. She is in a lesbian relationship with Indy, who works for the family firm and is training to be a funeral director. Hannah goes to university and is studying quantum physics. She is devastated when Melanie, her flatmate and fellow student goes missing…  She enlists her family’s private detective agency to investigate, doing some of the legwork herself.

Schrödinger – the Skelf family’s ginger tabby, was a welcome diversion throughout the novel. Aloof, yet affectionate, Schrödinger was fond of bringing home dead birds for his family…

“…we all compartmentalise, we make excuses to ourselves, justify decisions, ignore the awful things we do because the alternative is to accept that we’re bastards.”

After reading Doug Johnstone’s brilliant “The Breakers” last year I was more than eager to read his next book.  “A Dark Matter“, the first book in a new series, more than met my expectations.

With an unique family dynamic, and an even more unique family business, this story had me hooked from the beginning. And what a beginning!  The first line reads “Her Dad took much longer to burn than she expected.”

In addition to the family’s personal stories, I enjoyed following the cases they were working on throughout the book.

The novel explores how we have many sides to our personalities and how we display these different sides to different people – at different times – throughout our lives.

Written with an engaging dark humour, this crime novel displayed a richness in characterization along with unique and clever plotting that made the story stand out from its peers.  With themes of betrayal, family secrets, deception and loss, the book reads as a pleasing cross between crime thriller and literary fiction. The three strong female protagonists captured my interest and the I am eager to read more about their lives and exploits in further books in the Skelfs series.

Doug Johnstone is an author, journalist and musician based in Edinburgh. He’s had nine novels published, most recently Fault Lines. His previous novel, The Jump, was a finalist for the McIlvanney Prize for Scottish Crime Novel of the Year. Several of his other novels have been award winners and bestsellers, and he’s had short stories published in numerous anthologies and literary magazines. His work has been praised by the likes of Ian Rankin, Val McDermid and Irvine Welsh. Several of his novels have been optioned for film and television. Doug is also a Royal Literary Fund Consultant Fellow. He’s worked as an RLF Fellow at Queen Margaret University, taught creative writing at Strathclyde University and William Purves Funeral Directors. He mentors and assesses manuscripts for The Literary Consultancy and
regularly tutors at Moniack Mhor writing retreat. Doug has released seven albums in various bands, and is drummer, vocalist and occasional guitarist for the Fun Lovin’ Crime Writers, a band of crime writers. He also reviews books for The Big Issue magazine, is player-manager for Scotland Writers Football Club and has a PhD in nuclear physics.

I was saddened to hear via Twitter that Doug Johnstone has recently suffered from a stroke. Please join me in wishing him a speedy and complete recovery!

11 Responses to “A Dark Matter” by Doug Johnstone – Book Review