DC Gaby Darin has just moved to Pembrokeshire, Wales after a difficult work-related experience in Swansea. She is teamed up with DCI Rhys Walker, a man who seems to have hidden secrets but is a copper that she respects.

Izzy Grant has tried to move on with her life. She now runs a cottage industry which supplies knitted goods. She lives alone with her rescue cat, Bucket. Five years ago, her partner and one week old daughter vanished without a trace. At the same time, her friend, Grace Madden disappeared. Now, while doing some Christmas shopping, Izzy spots Grace in a busy Cardiff street.

Naturally, Izzy tells the policeman who was on the case five years ago… DCI Rhys Walker. He and the new to the area DC Gaby Darin re-investigate the cold case.

Gaby is increasingly aware that her partner, DCI Rhys Walker has personal feelings for Izzy.  She tries to keep this knowledge on the back burner whilst working the case.

Meanwhile, Izzy does more than a little amateur sleuthing herself.

Izzy receives a postcard from Charlie, her daughter’s father:

With renewed hope that her daughter might still be alive, Izzy makes every effort to determine what happened five years ago. Her efforts put her in grave danger.

I was pleased to make the acquaintance of a new female police protagonist. DC Gaby Darin was an interesting character. Bright, brash, overweight, lonely, and very good at her job.

The Pembrokeshire setting was well-described and the plot contained more than one ‘red-herring’ which will please most mystery readers. One of these had me thinking that I had the story all figured out – I was dead wrong. Another red-herring led the story down a path that I felt wasn’t resolved as much as it should have been. Finally, I put my own brain in gear and guessed the outcome of the story. I was nearly at the end of the book, but as they say ‘better late than never’. LOL

I am convinced that “Silent Cry” will be well-received by all those readers who delight in a well-written police procedural mystery. I look forward to the sequel which has DC Gaby Darin starting out again at a new police station  – this time in Llandudno.

“Silent Cry” was previously published under the title “Missing in Wales” 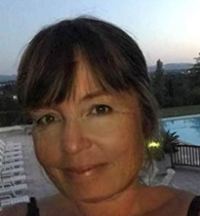 Born in Dublin, Ireland, Jenny O’Brien says she is a wife and mother first – a writer second. She has written romance, thrillers, and children’s books.

Jenny currently resides on the island of Guernsey with her husband, children and cats. She works as a nurse and writes in her spare time.