“The Garden of Lost Memories” by Ruby Hummingbird – Book Review

Posted on April 3, 2020 by Fictionophile

Sixty-two year old Elsie Maple is living a small, solitary, insular life.  Alone in the house for the past twenty-eight years, she has become a creature of habit, ritual, and routine. She has become so set in her ways that she dislikes any disruption from her planned activities. Even her jigsaw puzzle has a time slot on her “To Do” chalkboard. She crosses things off the list as she does them. No one ever visits. She has no friends – only acquaintances.

Until…. Samantha and her ten-year old son, Billy, move in next door. Samantha is a single mum who works irregular shifts in a restaurant. She enlists Elsie to babysit Billy after school.  This unremarkable request will spark a cosmic change to both their lives. For one thing, despite adhering to her scheduled tasks, Elsie finds herself not following them quite so closely. AND, after getting Billy to help her in the garden, she discovers that he is quite ‘green-fingered’ which creates a bond between them.

Billy is one unhappy boy. His Mum has made him move to this small village away from all his friends in London. They seem to be poor all of a sudden. Billy’s Mum will not buy him a mobile phone and they don’t even have a television! He feels particularly hard done by and this is exacerbated by the fact that he is being bullied at his new school.

Initially he is loathe to spend time with the crotchety old lady, but once he discovers her garden he begins to warm to spending time next door.

Until that is… one day he digs up an old, rusty, red tin. When Elsie sees what he has unearthed, she yells at him and he vows to not go there again. 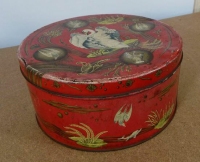 Elsie, upon seeing the tin, is overcome with emotion. The tin holds her secrets. Secrets she has been holding close to her chest for almost three decades.

I thoroughly enjoyed accompanying Elsie and Billy as their relationship evolved over time. This was a ‘feel-good’ novel about ordinary people coming to terms with loss, loneliness, change, regret, and memories.

A delightful mixture of literary fiction and women’s fiction, this story will warm your heart.  Yes, it was fairly predictable, but the characters were so engaging that it didn’t really matter. The pace was fairly slow, yet it almost seemed as though you were experiencing the events with the characters. And that’s what good fiction strives for, surely.

This review was written voluntarily and my rating was in no way influenced by the fact that I received a complimentary digital copy of this novel from Bookouture via NetGalley and Sarah Hardy in order that I could participate in this blog tour.

Check out some of the other stops on the tour!

Ruby Hummingbird is a novelist based in the English countryside. She loves nothing more than writing uplifting and heartwarming fiction that gets her readers reaching for the tissues. When she isn’t storytelling, she can be found tending to her beloved sunflowers or sipping on hazelnut lattes.