“The Girl from Widow Hills” by Megan Miranda – Book Review 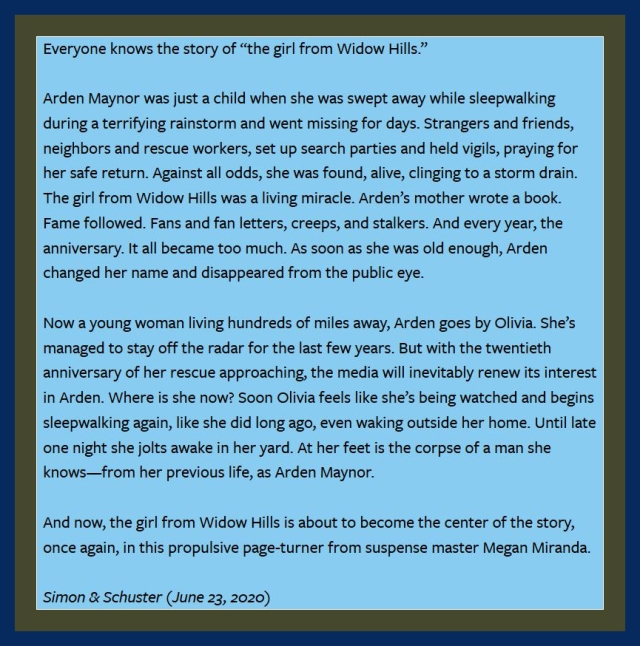 Olivia Meyer works as a hospital administrator in North Carolina. She is a solitary woman in her mid-twenties who lives outside town in a semi-rural location. One day she receives a box containing some things that belonged to her mother from whom she has been estranged for several years. Along with the box comes word that her mother has died… some seven months previously.

“How could you become someone new when everyone kept pulling you back to the person you once were? How could you fight that sort of gravity?”

It is now just two months away from the twentieth anniversary of Olivia’s childhood trauma which occurred when she was just six years old. She has never been able to remember exactly what happened to her during the three days she was lost. Though to this day she cannot stand being in confined spaces like elevators and she avoids feeling ‘trapped’ by places and by people.

Since receiving the box with her mother’s possessions, Olivia begins to sleepwalk again – as she did as a child.  One night she awakes to find herself outside her house standing over the dead body of a man…

Olivia’s traumatic past and current predicament make her paranoia quite understandable. She is an empathic character, though for some reason I didn’t completely warm to her.  She has always felt like a ‘commodity’. To her mother who gained financially after writing a book about the trauma, to the town who benefited, to everyone. She yearns for the friendship of people who do not know about her past, people who accept her for ‘her‘.

The setting of the novel was well described and easy to visualize. The writing held my attention throughout with pacing that was neither too fast nor too slow.

The compelling factor for me was that Olivia was under the scrutiny of the police as a potential murder suspect, while Olivia herself was unsure if she had committed the murder or not… Riddled with self-doubt, she doesn’t trust herself.

This is the first novel by Megan Miranda that I have read, and though not a personal favorite, I would definitely read more by the author and recommend “The Girl from Widow Hills” to other readers.

This review was written voluntarily and my rating was in no way influenced by the fact that I received a complimentary digital copy of this novel from Simon & Schuster via Edelweiss.

Megan Miranda is the New York Times bestselling author of All the Missing Girls, The Perfect Stranger, and The Last House Guest, a Reese Witherspoon Book Club pick. She has also written several books for young adults, including Come Find Me, Fragments of the Lost, and The Safest Lies. She grew up in New Jersey, graduated from MIT, and lives in North Carolina with her husband and two children.