I originally reviewed this title on January 2nd, 2012. Back then, I didn’t have many followers so the book didn’t get any attention. I thought that since Lume Books have taken over the Endeavor Press catalog, I would try to remedy that.

Brad Smith’s latest thriller “Red means run” set in rural upstate New York, exhibits good, sound story-telling and introduces a new and compelling protagonist. The title is from a lyric from “Powderfinger”, an old Neil Young song. The subtitle, ‘a Virgil Cain mystery’ ensured that every time I picked up the novel I found myself humming the classic Joan Baez tune “The night they drove old Dixie down”. Like the Virgil Cain(e) of the song this Virgil was not afraid of hard work and seemed to live by the words “take what you need and leave the rest”. The adjectives I would best use to describe him are admirable and honorable.

The beginning of the novel (which is needed to set up the story) was for me a bit disappointing–mostly I think because the character introduced in the beginning, Mickey Dupree was an unlikable chap. An unscrupulous criminal attorney and avid golfer, he does not engender sympathy or regret when he is killed off at the end of the first chapter.

The second chapter introduces us to Virgil Cain and from there on I was hooked, turning the pages as one might gobble down a great Christmas dinner.

An over-zealous (and not very bright) cop arrests Virgil for murdering Dupree. The strong, silent type, Virgil takes his arrest very stoically while I as the reader was outraged on his behalf. His character comes across as being honest and compassionate and the reader just knows that it is impossible for him to have murdered anyone. When Virgil realizes that the police seem satisfied that they have their man, he knows that he must find out who did murder Dupree so as to exonerate himself. Of course in order to do that he must escape custody…

Virgil’s friend Mary, a septuagenarian veterinarian was a highly moral character that I hope returns in subsequent novels. Mary, like Virgil, has her head screwed on straight and knows the meaning of loyalty and friendship. She, along with the female homicide detective Claire Marchand are the only two allies that Virgil has. Gorgeous and very clever, Claire was the perfect foil for a man as highly principled as Virgil. Filled with suspense, horses, a ‘salt of the earth’, honorable protagonist and just a touch of romance ensures that “Red means run” will appeal to anyone who has ever enjoyed a Dick Francis novel. Be prepared to find yourself reading well into the wee hours… I eagerly await the second book in the series, “Crow’s Landing“. 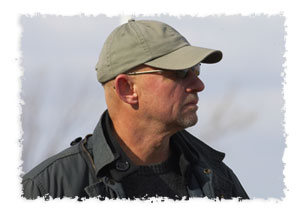 Brad Smith was born and raised in the hamlet of Canfield, in southern Ontario, a couple of hours from Toronto.

He has lived many places over the years – at a variety of jobs. Farmer, signalman, insulator, truck driver, bartender, schoolteacher (certain lies about his post-secondary education were told to acquire that job), maintenance mechanic, roofer, and so on. He became a carpenter and built custom homes in the Dunnville area. He still works as a carpenter when not writing. He now lives in a seventy-year-old farmhouse near the north shore of Lake Erie.

Smith started writing in his late twenties, in part to see if he could.  A couple of years later, holed up in the small town of Revelstoke in the Rocky Mountains, he actually finished a novel which is unpublished to this day, and will remain so. The next effort, however, was Rises A Moral Man, published by John Flood at Penumbra Press. Since then he has published One-Eyed Jacks (2000), All Hat (2003), Busted Flush (2005), Big Man Coming Down The Road (2007), Red Means Run (2012), Crow’s Landing (2012), Shoot The Dog (2014), Rough Justice (2016), Hearts of Stone (2017), The Return of Kid Cooper – 2019 winner of the Spur Award for best traditional western novel and The Goliath Run – available spring 2020.