“The Memories We Bury” by H.A. Leuschel – Book Review

Posted on September 2, 2020 by Fictionophile 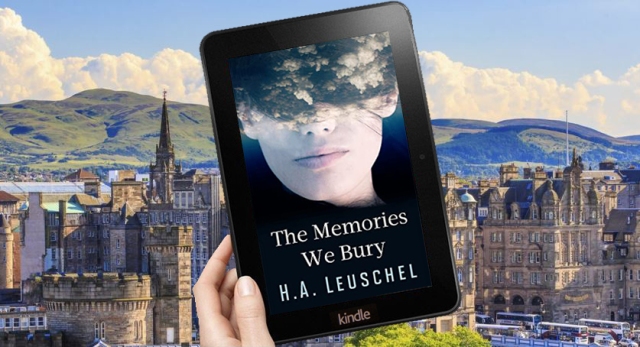 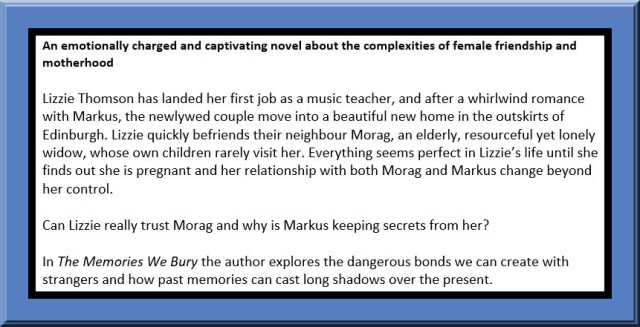 Lizzie Thomson – in her mid-twenties, Lizzie is a music teacher who is also a talented pianist. She was raised by a cold and domineering mother and a father who resided uncomfortably under his wife’s thumb. The only source of love and support in her life came from her grandfather who passed away when Lizzie was just eleven years old. Now Lizzie finds herself a new mother herself. She is tired, vulnerable, and insecure. Her husband Markus gives her little support, so she welcomes the attentions of Morag, her neighbour. 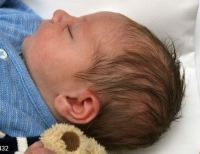 Markus Thomson – handsome, charming, and self-involved, Markus comes across as unlikable. Pompous, sexist, critical, and self-centered, he distances himself from his wife and child by deeming parenting ‘mother’s work‘.

Morag – a retired nurse, and a widow with two adult children. Both her children show no signs or desire to make her a grandmother, so when her young neighbour, Lizzie, falls pregnant, she insinuates herself into the woman’s life and fancies herself as a ‘surrogate grandmother’ to Lizzie’s baby, Jamie. Morag, though at first comes across as sympathetic and helpful, soon reveals herself to be a very controlling and manipulative woman. She could be the reason for the old idiom: “Give someone an inch and they’ll take a mile.”

“Trust is a fragile bird perched on a branch that is so dry it will break at the first unexpected breeze.” 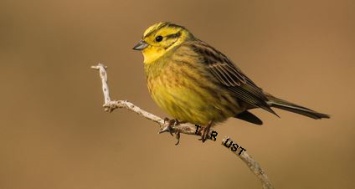 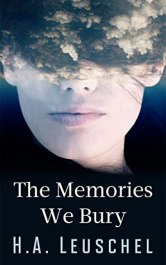 I read the novella “My Sweet Friend” by this author in late 2017 and since then I’ve been eager to get a chance to read more of her writing. In addition, the effective and attractive cover design was eye-catching and made me want to read “The Memories We Bury“.

With skillful prose and a deep understanding of human nature, Leuschel has written a novel that explores the fine line between caring, insecurity, manipulation, and being supportive.

Though on the surface, this should have been a straight-forward read, I found that there was an underlying feel of unease and disquiet that remained with me throughout the entirety of the book.

The novel serves to remind us that “The Memories We Bury” are often those memories which shed us in a less than flattering light. That feelings of inadequacy make us vulnerable to those who are more wily and manipulative.

Strong and empathetic characterization was the novel’s strong point. Told from the point of view of the two main female characters, the reader questions whose side they should be on… who’s telling the real truth?

Just how much do our childhood experiences influence the way our lives turn out?

Highly recommended to those readers who enjoy a psychological novel, strong in characterization, which delivers a message via a tense and ofttimes disturbing read. Though the pace of the book was rather slow, it was conversely also a page turner – cumulating in a final page that is memorable and shocking in equal measure.

This review was written voluntarily and my rating was in no way influenced by the fact that I received a complimentary digital copy of this novel from the author in order that I might participate in this Damppebbles Blog Tour run by Emma Welton.

Check out some of the other stops on the tour to read of other reader’s perspectives on this novel: 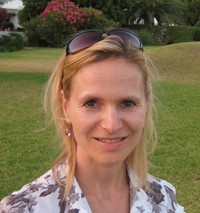 Helene Leuschel grew up in Belgium where she gained a Licentiate in Journalism & Communication, which led to a career in radio and television in Brussels, London and Edinburgh.
She now lives with her husband and two children in Portugal and recently acquired a Master of Philosophy with the OU, deepening her passion for the study of the mind. When she is not writing, Helene works as a freelance journalist and teaches Yoga.

10 Responses to “The Memories We Bury” by H.A. Leuschel – Book Review