Way back in January of 2017 I read this author’s debut novel, “The Bird Tribunal” and it turned out to be my favourite book of the year! Ever since then, I’ve been anxiously awaiting her next work. It was worth the wait! 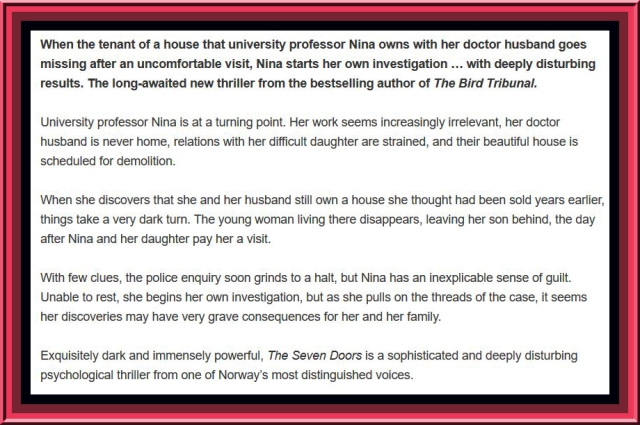 Nina Wisløff– a literature professor in her early sixties, she is married and the mother of one adult daughter. She is grandmother to a three year old girl and has been married for decades to her husband Mads, who is a doctor. 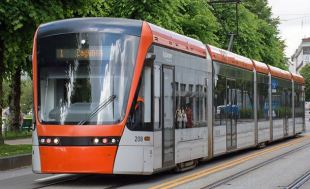 Nina’s family home, where she still lives, is being confiscated for demolition because they are going to build a new light-rail track on the site.  Distraught, she and her husband must now go house-hunting.

Nina’s daughter Ingeborg, a forthright and less than likeable young woman is also on the look-out for new accommodation because she is expecting another child. When she learns that her father owns a desirable property that he has been renting out, she wants to view it with the prospect of moving there as soon as possible.  Nina and Ingeborg visit the house where Mari Nilsen, the tenant, is less than welcoming – mostly due to Ingeborg’s insensitive approach and lack of empathy.

“Curiosity, in spite of its appeal, often leads to deep regret.”

A few days later, while Nina is reading the paper, she recognizes a picture of the tenant they met that day. Apparently Mari, the thirty year old single mother has been reported missing…

Nina attempts her own investigation into Mari’s disappearance. She feels somewhat guilty for the way that she and her daughter acted the day they visited her house. She soon discovers that Mari Nilsen, a proofreader and translator, formerly went by the name of Mari Bull and worked as a concert violinist.

Mari vanished without trace – leaving her three year-old son behind…

After my first experience with the writing of Agnes Ravatn, I expected this novel to be great – and I wasn’t a bit disappointed.  “The Seven Doors” kept me enthralled for the entire book with scenes and characters that were very easy to visualize.

The novel, a ‘slow-burning’ domestic thriller with psychological overtones, was brilliantly plotted. Having Nina as the sole narrator of the story created more of a mysterious atmosphere as you didn’t know what anyone else was thinking or feeling. The ending left the reader simultaneously satisfied and chilled.

Some of the themes covered were betrayal, trust, coping with change, loyalty, family secrets, and the inequality present in most doctor/patient relationships.

With literary references, musical jargon, strong characterization, and a somewhat complex story, the author has written another compelling thriller, while the translation from the Norwegian was seamless and accomplished.

I can’t wait to see what Agnes Ravatn writes next. Highly recommended!

This book was translated from the Norwegian by Rosie Hedger.

Thanks to Orenda Books for providing me with a complimentary digital copy of this book in consideration of my review. 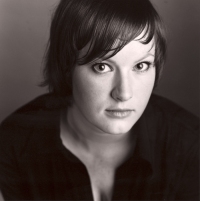 From Orenda Books:
Agnes Ravatn (b. 1983) is an author and columnist. She made her literary début with the novel Week 53 (Veke 53) in 2007. Since then she has written three critically acclaimed and award-winning essay collections: Standing still (Stillstand), 2011, Popular reading (Folkelesnad), 2011, and Operation self-discipline (Operasjon sjøldisiplin), 2014. In these works Ravatn shows her unique, witty voice and sharp eye for human fallibility. Her second novel, The Bird Tribunal (Fugletribuanlet), 2013, is a strange and captivating story about shame, guilt and atonement. Ravatn received The cultural radio P2’s listener’s prize for this novel, a popular and important prize in Norway.

7 Responses to “The Seven Doors” by Agnes Ravatn – Book Review