Posted on November 1, 2020 by Fictionophile 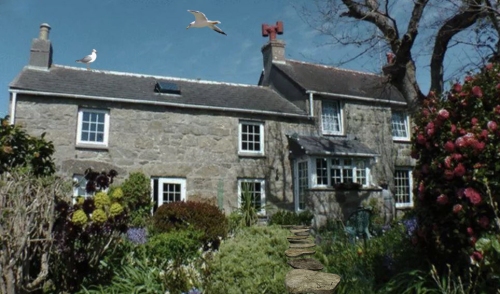 1951-52 – Esther Durrant has just lost her infant son. Blaming herself, and suffering from post-natal depression, she is despondent and lethargic. Her husband, at a loss as to what to do, sends her to one of the Isles of Scilly to be cared for by a psychiatrist, Doctor Richard Creswell. The good doctor normally treats the victims of shell-shock and other war-related traumas, yet he has made an exception to treat Esther as a favour to her husband, an old friend of his. The doctor works from an old stone house, the only house on the island. He has a housekeeper, a nurse, three male patients and Esther. Abandoned to this remote locale, she desperately misses her two-year old son Teddy.  Esther is to spend almost five months on the island. This short time would impact her entire life is a myriad of ways.

2018 – Rachel Parker, age 35, works as a marine research scientist. Reluctant to make any long term commitments of any sort, Rachel has traveled the world with her work. Her latest posting on the Isles of Scilly, is one she is eager for. Located two and a half hours by boat off the southern coast of  Cornwall, she is to study the ‘Venus verrucosa‘ clam. She becomes acquainted with several of the island residents and starts to feel comfortable. Then, a lack of judgement has her out in her boat in a sudden storm. Hurt and in dire need of rescue, she is found by a reclusive island resident named Leah. Having to wait several days until the next supply boat is due to arrive, she is stranded. Leah roots out an old suitcase from the house which contains clothes that Rachel might be able to wear while she waits to get off this tiny island. In the suitcase, beside the vintage clothes, she also finds a book and some unsent letters.

2018 – Eve Ambrose, age 23, is spending the summer looking after her grandmother who is recovering from a broken hip. Nearing her ninetieth birthday, she is frail and cannot be left alone. Also, Eve has agreed to write her grandmother’s biography. Her Gram was once a world renowned mountaineer.

What a joyful experience it was reading this well-rendered story. Both of the female protagonists were such interesting characters and I was wondering all the while just how the two tales would converge.

The remote locale and island setting made the book a very atmospheric read. That coupled with the well-developed plot and empathetic characters assured that it will be one of my favourite novels read this year.

If I had to find one fault with it is that the ending seemed to come on suddenly, yet, having said that, the ending did tie up all loose ends and left the reader with a satisfactory feeling.

Long held secrets, forbidden love, and a modern woman’s tale, this novel, with its dual timeline, will appeal greatly to fans of such authors as Kate Morton, Rosamund Pilcher, Harriet Evans, and the like.

This review was written voluntarily and my rating was in no way influenced by the fact that I received a complimentary digital copy of this novel from
William Morrow/Harper Collins via Edelweiss.
ISBN: 9780062970589    ASIN:  B07SRTCC3L     400 pages

(Note: Because this novel’s title contains both the first and last names of a person it qualifies to fulfill one of the entries for the #FFRC2020 Reading Challenge)

Kayte Nunn grew up in England and the US, and then lived in Sydney, Australia for more than 20 years, working as a book, magazine and web editor and writer. She has more than two decades of publishing experience and is the former editor of Gourmet Traveller WINE magazine.

She had always written – terrible poetry, short stories and angst-ridden diaries – and has an enduring love of books and stories. She devoured the books from the library of the boarding school she attended.

She loves nothing more than a generous slice of warm cake, a cup of tea, a comfortable place to sit and a good book to read!