Posted on November 8, 2020 by Fictionophile 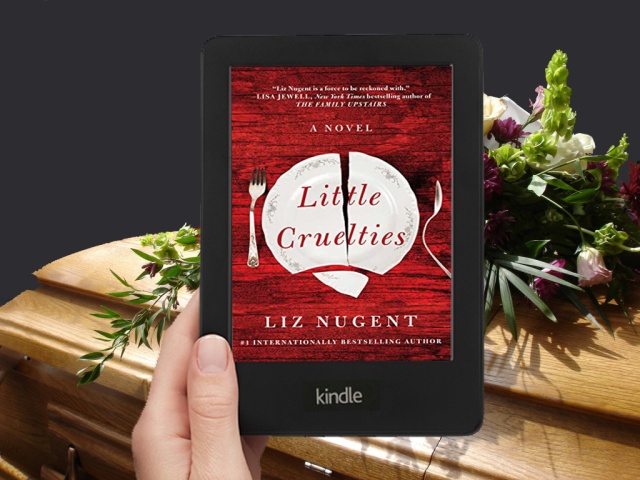 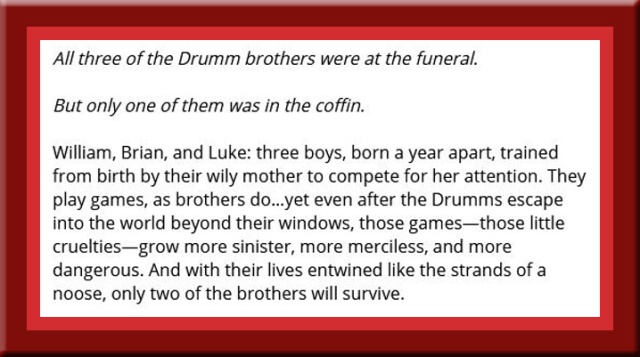 William Drumm – the eldest brother is disdainful of his siblings. He has always been his mother’s favorite (in as much as she has a favourite…) William always felt entitled and he was a womanizer and film producer. He marries Susan and has one daughter, Daisy.

Brian Drumm – the middle child. He is the peacemaker in the family, yet he too has his own selfish agendas. He becomes a teacher, then a talent agent. He is known for frugality and will do anything to save money. He has long been in love with William’s wife Susan.

Luke Drumm – the baby of the family. He was his father’s favourite, but his father died when Luke was very young. Luke went through a period of religious zealotry which turned out to be the catalyst for many years of mental illness. Bereft of familial love, and very lonely, Luke turns to substance abuse when he finds himself a pop star in his early twenties.

Melissa Craig (Drumm) – a singer and actress, she was self-involved and sought attention by flirting with other men. Often unfaithful, she was not at all maternal and left the raising of her boys to their father. Sadly he passed away when the boys were in their teens. Her interactions with her sons were filled with emotional abuse. 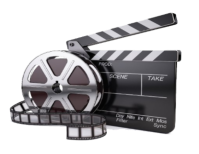 The entire Drumm family were involved in show business in one aspect or another. They were privy to all the excesses and indulgences the business and wealth could provide – yet they were all miserable.

“We all knew the experience had scarred him deeply, but it was one of our family’s little cruelties to revisit it, often.”

The reader meets the brothers Drumm at a funeral. We then go on to read the entire novel to discover which one of the brothers has died, and how his death came about…

I’ll confess that this is a novel that took me quite some time to become engaged in. The characters were for the most part unlikable, though the youngest brother, Luke Drumm was a piteous figure who you couldn’t help feel sorry for.

The brothers Drumm were characters who had been directly influenced by their narcissistic mother who seldom showed them any maternal love in any demonstrable way. As children they were not well off, though they found monetary success in later life, their personal lives were shallow and even tragic at times. Their Irish Catholic upbringing was not a huge factor in any of their lives with the exception of Luke, who took his faith and belief to extremes.

Seldom have I heard or read about siblings who were so nasty, unloving, and competitive with each other. Some would expect them to unite with each other against their upbringing and their manipulative mother – yet the very opposite occurred.

The story is told from each of the brothers viewpoints via a nonlinear timeline.

This novel explores themes of parenting, sibling rivalry, mental illness, substance abuse, fame, betrayal, jealousy, and familial dysfunction. The family didn’t show any warmth throughout the entirety of the book. Believe me, you wouldn’t want to meet any of the three brothers in real life for fear their toxicity would rub off on you. Make no mistake, this was a dark, disturbing, and bleak novel.

It is my practice to never give up on a book so I soldiered on… The last chapter was bleak and chilling. That chapter, and the skilled writing, raised my rating from 2.5 to 3 stars.

The writing must have been masterful for me to feel so strongly about these characters (albeit in a negative way). I have heard much praise for this author from other reviewers. Therefore I do plan to read more of her work. Perhaps this wasn’t the title to start with…

This review was written voluntarily and my rating was in no way influenced by the fact that I received a complimentary digital copy of this novel from
Gallery/Scout Press via Edelweiss.
ISBN: 9781501189685    ASIN:  B084G9L22G     352 pages 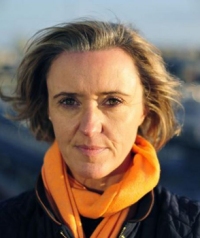 Liz Nugent is an Irish novelist who was born in Dublin in 1967. Liz first began to write for broadcast in 2003. In 2006, her first short story for adults, Alice, was shortlisted for the Francis McManus Short Story Prize. Liz is the author of four psychological thrillers which have received much literary acclaim. Unravelling Oliver, Lying in Wait, Skin Deep, and Our Little Cruelties. Aside from writing, Liz has led workshops in writing drama for broadcast in Ireland and New Zealand, she has produced and managed literary salons, interviewed many other writers and curated the literary strand of Skibbereen Arts Festival in July 2016.

Fiction reviewer ; Goodreads librarian. Retired library cataloger - more time to read! Loves books, gardening, and red wine. I have been a reviewer member of NetGalley since October 2013. I review titles offered by Edelweiss, and participate in blog tours with TLC Book Tours.
View all posts by Fictionophile →
This entry was posted in Book Reviews, Edelweiss and tagged Ireland, stand-alone novels. Bookmark the permalink.