Posted on February 6, 2021 by Fictionophile

“Imagination is gifted to the young.
How can we blame then when adults turn it into a tinderbox?” 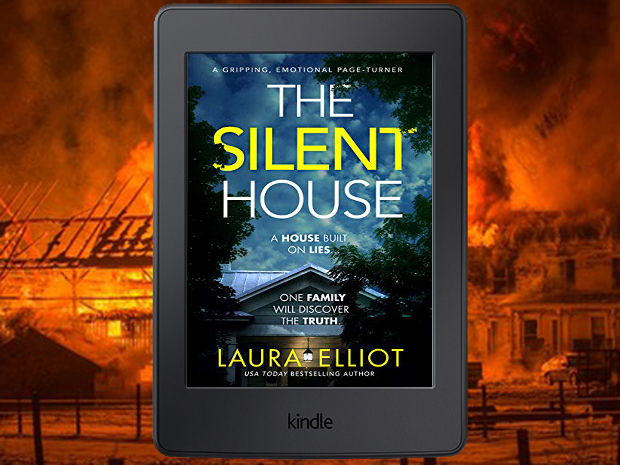 Sophy Kingston is the mother of two daughters. Her marriage just broke up due to her husband’s gambling addiction. They have had to sell their Dublin home, their two cars, and their businesses to pay off his gambling debts.  Filled with rage and resentment for her husband Luke, she tries to hide it from her girls. Now, she has been offered a position as a live-in nurse to a man who suffered debilitating burns after a fire on his property. She moves herself and her two daughters to Hyland Hall, a neglected, but once grand house, an hour’s drive outside Cork.

Jack Hyland is suffering terribly from his recent burns. Just skin and bone, every move he makes brings incredible pain. His face is a travesty. He remains on the second floor of the house and doesn’t want anyone to ‘see’ him other than his nurse, Sophy.

Meanwhile, Sophy’s daughters make up stories about the old man upstairs. They view him as a monster… the undead.  They are very afraid of his german shepherd dog, Caesar.

Jack’s nephew, Victor Coyne, lives in the property next door to Hyland Hall. He ingratiates himself into the lives of Sophy and her daughters.

Isobel and Julie are devastated by their parents separation. They once lived in a happy family, in a prosperous suburb of Dublin, going to school where they had many friends.  Now, their mother and father are desperately unhappy, they are living in a strange, rather eerie old house, and they don’t have any friends.  The youngest, Julie, has a mannequin from her mother’s (now sold) children’s clothing store. She brings this mannequin, which she has named Cordelia, with her everywhere she goes, and speaks through her to vent her innermost feelings.

Anyone looking for a suspenseful, adrenalin-packed thrill ride, need look no further. Though there were a few parts of the book that were overly dramatic, and made me suspend belief, it was a page-turner. Part crime thriller and part romantic suspense, the novel had me gripped under its spell for two days.

The atmosphere and descriptions were very vivid. The characters quite easy to imagine, though at times I grew impatient with Sophy and her daughters, I came to like and understand them more towards the end.

The plot was well planned and executed. It spoke to what measures some people will go in the name of avarice. How difficult it is to trust after it has been lost, and also, to the randomness of fate.

This is my first Laura Elliot novel, and when time permits I will search out more of her work.

NOTE: When I requested this novel from NetGalley, its title was “The Tinderbox“.  I can’t think why they decided to change it to “The Silent House”. The original title fits the book perfectly and is much more unique.

This review was written voluntarily and my rating was in no way influenced by the fact that I received a complimentary digital copy of this novel from
Bookouture via NetGalley.
ISBN: 9781800190849    ASIN:  B08M68SBLY     366 pages

She lives with her husband, Sean, in the coastal town of Malahide, County Dublin, Ireland – close to the wonderful Broadmeadow Estuary, which has featured in a number of her novels.

She has written six adult novels under the pen name Laura Elliot, and twelve novels for children and young adults under the name June Considine.

5 Responses to “The Silent House” by Laura Elliot – Book Review