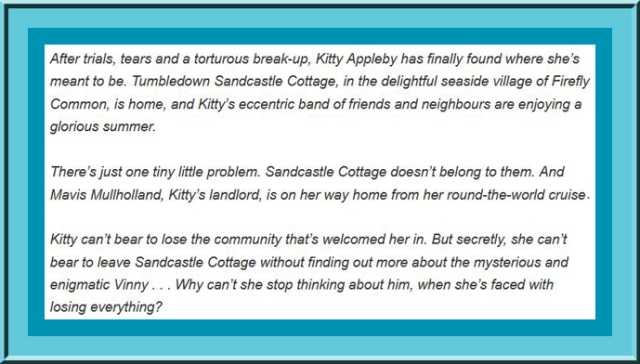 Kitty has had a rough run of luck. After a hurtful breakup, the subsequent result is that she has lost her home, her car, and her job. Now, though, she couldn’t be happier. She has found a new home, albeit a temporary one, in a charming former seaside B&B which she shares with a motley group of friends, a small child, and two rescue Staffordshire terriers.

Kitty is working at a fish & chips shop. Her housemates include Jemini, a young Asian woman who works in an estate agent’s office, Jemini’s toddler daughter Teddy, and Apollo, a chef. Their life cohabiting is quite idyllic.

While walking the dogs on the beach one morning, Kitty meets an enigmatic and gorgeous man and immediately falls in love. Though her unguarded mouth, and other misunderstandings keep her from forming any kind of relationship with him.

And… Kitty and her housemates are only too aware that their time in the wonderful seaside community is limited. The owner of Sandcastle Cottage will soon be returning to claim her home.

I was in the mood for some romance, but truth be told this was just too light and unrealistic for my taste. I prefer a love story with a little more substance, more heft. I can’t quite immerse myself in a story that presents a ‘perfect’, happily ever after scenario, with story outcomes that are so improbable.

Given my own personal reservations, I have to concede that for many readers this would be a perfect beach read. Light, happy, and bordering on the idyllic, it was just too idealistic for me. A fluffy, romantic, escapist romp through the sand…

Christina Jones has written all of her life (as well as having millions of proper jobs (including factory worker, secretary, nightclub dancer, blood donor attendant, barmaid, waitress, civil servant and fruit picker) Christina first had a short story published when she was just 14 years old. She has written for teenage and women’s magazines – fiction and non-fiction – for a number of years, had her own humour column in The Oxford Times, and has contributed to national newspapers.