“I muse over how different people can have the same experience and yet totally different memories.”

Clare Tennison is a hard-working solicitor who is a named partner in her Bristol law firm. She is happily married to her artist husband, Luke, and is the mother to two young girls, Hannah and Chloe. She lives in the house she grew up in in a village a short drive from Bristol. Clare’s family shares the house with her mother, Marion.

When Clare was a young child, her family broke apart. Her father took her younger sister Alice and emigrated to the United States – leaving Clare and her mother behind. Needless to say, Clare’s mother was heartbroken and for many years both mother and daughter searched for Alice.

Now, miraculously, Alice has contacted them! Clare’s mother is overjoyed and Clare is delighted for her. However, shortly after Alice’s arrival in England, Clare begins to feel an intense jealousy of her younger sister – who feels like a stranger… There seems to being something ‘off‘ about Alice. She seems to have insinuated herself into Clare’s life and taken over. She wears Clare’s clothes, uses her computer, becomes her mother’s favourite daughter, her husband’s friend, and is there for her children when Clare is at work. She gaslights Clare, making it appear that Clare is a liar… Alice appears as a manipulative, deceitful fantasist.

Clare seems the sane sister, yet could her jealousy be fueling her actions? Was she always jealous of her sister because her father took her and not Clare?

And don’t you just love this first paragraph?

The entire time I was reading this thriller I was firmly on Clare’s side. Alice seemed a manipulative cuckoo in Clare’s comfy nest. Yet, knowing that this was a thriller, and could possibly have an unreliable narrator, I wondered if my reactions were engineered by the author. Perhaps Clare was not as blameless and victimized as I assumed? This premise kept me turning pages at a rapid pace to find out which of the sisters I should trust.

The pacing of the story was spot on with the tension ramping up gradually from about the 40% mark. The characters were well drawn and believable.

The ending drew the narrative to a satisfactory conclusion with a few twists to add to the enjoyment. All in all, a domestic thriller that I enjoyed reading, and I would definitely read more by this author when time allows.

3.5 stars rounded UP for Amazon and rounded DOWN for Goodreads where the star ratings have different values.

This review was written voluntarily and my rating was in no way influenced by the fact that I received a complimentary digital copy of this novel from Harper Impulse/Harper Collins via Edelweiss  – Published May 23, 2017 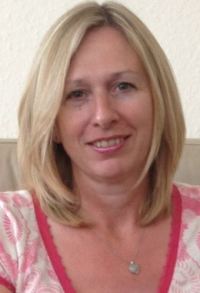 Sue Fortin was born in Hertfordshire but had a nomadic childhood, moving often with her family, before eventually settling in West Sussex. She is married with four children, all of whom patiently give her the time to write but, when not behind the keyboard, she likes to spend time with them, enjoying both the coast and the South Downs between which they are nestled. She is a member of the Crime Writers’ Association. Sue Fortin has sold over half a million copies of her books worldwide.