Posted on September 20, 2021 by Fictionophile 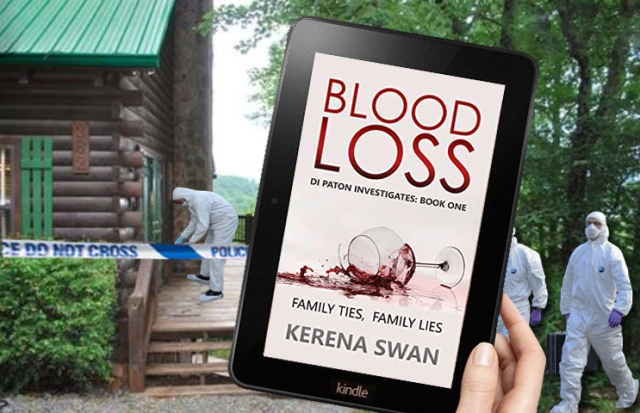 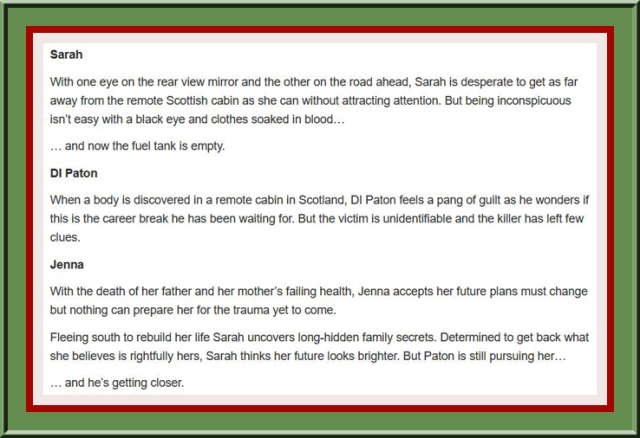 DI Paton is 48 years old and married to Wendy, who suffers from severe depression. He is the father to a teenage boy named Tommy who has Down’s Syndrome. Paton has recently moved to Perthshire, Scotland from England and is eager to prove to his new team that despite his family problems, he is committed to the job and to his team.

When a bloodied murder victim is found in a holiday cabin, Paton and his team face a challenge. None of them, Paton included, are that well versed in homicide inquiries. This is an opportunity to show the ‘higher ups’ just what they can do.  The only problem is there is little evidence to guide them… Even identifying the murder victim proves problematic.

Sarah – has fled Perthshire, bruised and bloodied. What started out as a lovers getaway has turned into a fatal attack. She drives south, toward her mother’s house in Milton Keynes. Once there, she finds her mother inebriated and the house a tip. Her mother has slowly declined ever since her father was imprisoned after murdering her mother’s co-worker. Dirty liquor bottles, dirty dishes, and dirty floors all serve to disgust Sarah. She sets about cleaning the place, then searches for some much needed employment. Sarah is a damaged and callous woman who has become very bitter at her lot in life.

Jenna – is 24 years old and a bit of a free spirit. She longs to travel the world. She dresses in long skirts and flipflops, and wears her hair in dreadlocks. She has a horse named Merlin who she dotes on. She lives with her mother who is not doing very well since the death of Jenna’s father. Jenna’s sister, Lucy, who is engaged to be married no longer lives in the family home. Lucy is planning a surprise 60th birthday party for their mother. A party that Jenna thinks is a bad idea. The sisters agree on very little and have literally nothing in common.

Having read and enjoyed this author’s previous novels “Scared to Breathe“,  and “Who’s There?“, and the D.I. Paton series prequel “Here She Lies“, I was in no doubt as to whether I would relish “Blood Loss“. I was in no way disappointed.

The protagonist in this police procedural is a caring man who has yet to show his ‘mettle’ to his new coworkers. He is a very authentic character who is less than perfect, though he continually strives to be better.

I’ll admit that while reading the first chapters of the book I couldn’t for the life of me figure out how Jenna’s character fit into the overall narrative. What could she have to do with the murder in Perthshire, Scotland?  The crime occurred in February, and Jenna’s story is set the following June. However, the author cleverly weaves Jenna into the mix, while illuminating just how damaged Sarah’s psyche really is.

“Blood Loss” is a fine novel with which to begin a police procedural series. With a likeable protagonist, the book makes you want to follow him in further novels. The murderer’s motive would be considered to be somewhat implausible to some, but this murderer had a very damaged mind and a childhood bereft of affection and approval.

The book spoke to themes of loveless childhoods, nature vs. nurture, the effect of rejection on the psyche, and the protagonist’s struggle with his home/work balance. It also portrays a realistic look at the dogged persistence required in criminal investigation. In real life criminals are not found right away as depicted on television, and the job of the detectives involved is often fraught with frustrations.

At around the 75% mark, there was a plot twist that I didn’t anticipate (though perhaps I should have?)

The plot was intricately rendered. Kudos to Kerena Swan who kept the varied timelines and characters straight.

Recommended to all police procedural fans!

This review was written voluntarily and my rating was in no way influenced by the fact that I was gifted a complimentary digital copy of this novel from the author.

This title is currently available in Kindle format for FREE if you subscribe to Kindle Unlimited! 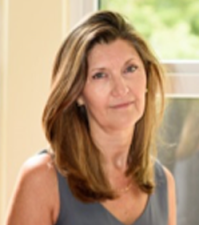 Kerena Swan trained as a Social Worker and worked for Social Services for over 25 years. For the past 14 years she has owned and managed an ‘outstanding’ rated care agency for children with disabilities. Following serious illnesses she decided to fulfill her long-held ambition of writing a book and getting it published. ‘Dying to See You’, published by Bloodhound Books, was her debut novel.
After many years of writing professionally in the course of her work, Kerena has discovered the exhilaration and deep joy of writing fiction and can be found at all hours in front of her computer. Her second novel ‘Scared to Breathe’ was released on 3rd June 2019 by Bloodhound Books.
Kerena lives with her family in a small village in Bedfordshire, England and her books are set in the surrounding areas.
Drawing on her extensive knowledge and experience of the problematic world of social work and social studies, Kerena adds a unique angle to the domestic noir and crime genre. Her latest novel, “Who’s There?” is self-published.

Kerena has recently signed up with the publisher Hobeck Books.
Visit https://kerenaswan.wordpress.com/  and join her mailing list.