The Throwback Thursday meme was created by Renee over at It’s Book Talk. She made this meme to share some of her old favorites. Although all bookbloggers have an endless TBR pile, we seldom take the time to reflect back and post about some of the great reads from a few years ago. It’s been over two months since I did a Throwback Thursday post, so I thought I’d remedy that because sharing book recommendations is one of my most favorite things to do!  “The Dead House” is a perfect read for this spooky month!

I originally reviewed “The Dead House” in March of 2018.

“Ireland is a country haunted by its past. In Billy O’Callaghan’s hands, its terrible beauty becomes a force of inescapable horror that reaches far back in time, before the Famine, before Christianity, to a pagan place where nature and superstition are bound in an endless knot.” — Publisher’s blurb

The protagonist of this story is art dealer/agent Michael Simmons. He begins relating his tale from the comfort and contentment of his present home in Cornwall, which he shares with his beloved wife, Allison, and his young daughter, Hannah.

He tells of his life nine years previously when he was still single and working every hour that God sent his way.  One of the artists he mentored, a young woman named Maggie, had recently been viciously assaulted by her partner. Still recovering, and wanting to put much space between her and the site of her attack, she drives to Ireland. While touring in Allihies, she spies a derelict coastal cottage and falls in love with its isolation, its presence.  Surely this will be the perfect place to take up her art once again.  She asks Mike for a loan and proceeds to ‘do up’ the old cottage.

When it is habitable once again she asks Mike and two of her female friends to spend the weekend there as a sort of housewarming party.  The weekend is a resounding success – filled with warmth, laughter and companionship, until the final evening there when one of the women guests suggests a séance.  Things happen that night that none of the people in attendance want to acknowledge.

Later, back in London, Mike begins to worry that he has not heard much from Maggie.  He decides to take a much needed break from work and drive up to County Cork to check on her.  What he finds is disturbing to say the least – and what follows is enough to chill the warmest heart.

“History here is a stew of fact and fable.”

The setting of this novel is one that positively breeds superstition.  With history predating any records, with a ring of standing stones, a menacing spirit, and an “aura of ancient magic“, it has all the qualities of the very best ghost stories. 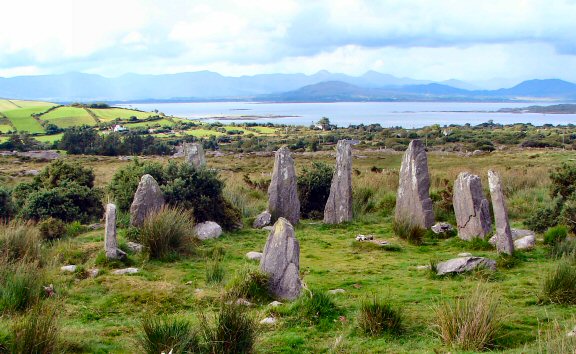 Some ghost stories are hokey, some are grim. This one, despite it being a debut novel, was the sort that makes the hair on the back of your neck stand to attention. If it was a movie I would surely have held a pillow up before my face whilst watching it – only to have nightmares afterward. WOW!

Billy O’Callaghan was born in Cork, Ireland, in 1974, and is the author of three short story collections: ‘In Exile’ (2008) and ‘In Too Deep’ (2009), both published by Mercier Press, and ‘The Things We Lose, the Things We Leave Behind’ (2013) published by New Island Books, which won a Bord Gais Energy Irish Book Award and which is forthcoming in a Chinese translation from CITIC Press in the summer of 2017.

“The Dead House” was his first novel.

His stories have been broadcast nationally on RTÉ Radio’s ‘The Book on One’​, Sunday Miscellany and the Francis MacManus Awards series, and have appeared in more than 100 magazines and literary journals around the world.