“The Death of Jane Lawrence” by Caitlin Starling – Book Review

“A crumbling house, alone on the hill, was enough to make isolated women
given to wild imaginings.” 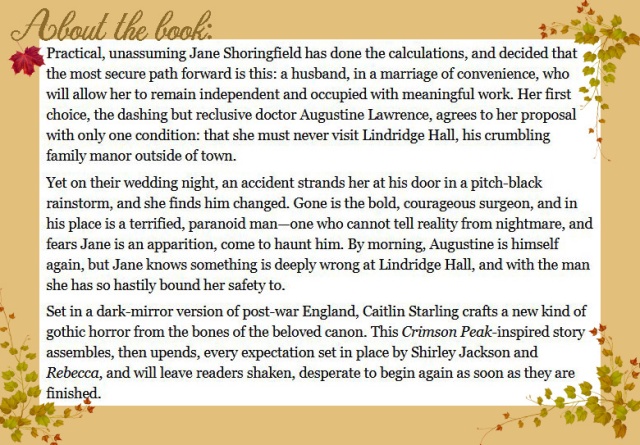 Jane Shoringfield is a young woman of high intellect with a logical, practical way of viewing the world and a keen mathematical mind. That is until she meets Dr. Augustine Lawrence. She approaches him with a betrothal – a marriage of convenience for them both. Little does she realize that her feelings about him will change, as will her world view.

After only one week’s acquaintance, Jane marries Augustine. He has one stipulation to their agreement… she must NEVER stay overnight at his family home called Lindridge Hall.

When on their wedding night, a violent rainstorm washes out the road to Lindridge, she is given no choice but to stay overnight. This is the beginning of Jane’s downward spiral.

Dr. Augustine Lawrence is a deeply troubled man. He is a gifted surgeon (for his time), yet we learn that he has many secrets. He collects medical oddities and curiosities.  He has mandated that the only person to stay at Lindridge Hall overnight is himself. He does not sleep soundly, for his medical failures return to him there.

“Lindridge Hall was undeniably strange. Hallways did not run in sensible lines, and the house sprawled more than it needed to, given the rooms it contained. She found several fake doors that only confused her more.”

Well folks, I had such great expectations of this book. The blurb states that readers will want to begin again after the last page was turned. I cannot imagine a scenario in which I would ever read this again.

Although the first third of the novel was very enthralling, with the gothic atmosphere and historical medical scenes, once the book moved to Lindridge Hall, I quickly began to lose interest. The scenes turned to the fantastical, with magic spells, strange occurrences, and plot devices which seemed almost a drug-fueled delirium.

I was okay with the alternate England. I was okay with the haunted house, but when it came to the fantastical meanderings of Jane’s mind while in the house, the blood and the gore of her newfound reality, I found myself skimming toward the end.

I really liked Jane’s character in the beginning of the book, but found her personality quite changed and distorted by the end.

Someone more versed in twisted horror and the historical fantasy genre will no doubt cherish this novel. However, I am not amongst their number. I found it to be a weird and confusing book which didn’t live up to it’s premise.

This review was written voluntarily and my rating was in no way influenced by the fact that I received a complimentary digital copy of this novel from St. Martin’s Press (an imprint of Macmillan Publishers) via NetGalley.

Caitlin Starling is the nationally bestselling author of The Death of Jane Lawrence, as well as the Bram Stoker-nominated and LOHF award-winning The Luminous Dead. Her other works include Yellow Jessamine and a novella in Vampire: The Masquerade: Walk Among Us. Her nonfiction has appeared in Nightmare, Uncanny, and Tor Nightfire. Caitlin also works in narrative design, and has been paid to invent body parts. Find her work at www.caitlinstarling.com and follow her at @see_starling on Twitter.