Posted on November 7, 2021 by Fictionophile

“Trouble prospers when uneducated men have too much time on their hands”. 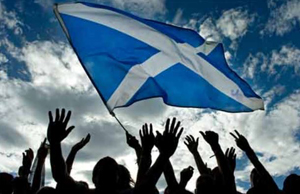 First I have to say that this story will remain in my memory for a very long time. The characters were so vividly rendered, the mood so brilliantly interpreted.

Although the Ayrshire, Scottish dialect was difficult going for the first few pages, I quickly became used to it, and then the pages flew by. I thought I’d be put off by all the footba (aka football, aka soccer) references, but I was not. That’s saying something as in my part of the world this sport is not as integral to society as it is in the United Kingdom. In Danny Garvey’s small town of Barshaw Bridge, the football team served as the ‘spirit’ of the town when the economy suffered a down-turn.

Danny Garvey was a man riddled with guilt and remorse, who is very lonely, and suffering from the ‘black dog’ of depression. Returning to his small home town, he seeks to atone, to reconnect with his meager family, and to confront his personal demons. Danny came from a dysfunctional background with a cold, alcoholic mother, and a volatile relationship with his manipulative half-brother, Raymond. His mother is now dying, and his brother is in prison.

Danny finds himself strongly attracted to his brother’s partner, Nancy. He also becomes very fond of Nancy and Raymond’s son, Damien (Damo), who is autistic and curiously constantly wears a space helmet. Danny is the new coach of the Barshaw Bridge Junior Football Team. The superstitious players always touch Damo’s space helmet before each game to bring them luck.

Those who are easily offended by curse words, will find the myriad uses of them off-putting, but for me it rapidly became part of the jargon of the characters.

It is hard to really delve into the reasons that I so enjoyed this book without giving away any ‘spoilers’, but suffice it to say that it was a different story to the one I expected when I began reading. It’s depths were many layered. It was a bittersweet novel with themes of obligation, responsibility, and dysfunction.

The writing was powerful, authentic, and heart-breaking. The ending was not at all what I anticipated. It is a novel to be savored, and preferably, discussed with others who have read it.

David F. Ross was born in Glasgow in 1964 and has lived in Kilmarnock for over 30 years. He is a graduate of the Mackintosh School of Architecture at Glasgow School of Art, an architect by day, and a hilarious social media commentator, author and enabler by night. His debut novel The Last Days of Disco was shortlisted for the Authors Club Best First Novel Award, and received exceptional critical acclaim, as did the other two books in the Disco Days Trilogy: The Rise & Fall of the Miraculous Vespas and The Man Who Loved Islands. David lives in Ayrshire, Scotland.

6 Responses to “There’s Only One Danny Garvey” by David F. Ross – Book Review