Posted on November 15, 2021 by Fictionophile

Detective Sergeant Sara Hirst is a city girl. Single, in her mid-thirties, she has recently moved to Norfolk from her position with the London Metropolitan Police. Her reasons for the move were two-fold. She wanted to find her birth-father (who worked as a policeman in the area), and she wanted to live on her own – something she couldn’t afford to do in London.

Her welcome to Norfolk was a bit rocky to say the least. Sara is dark-skinned and of mixed race. Her mother is of Jamaican descent and her father was white. She soon realizes that she is the only person of colour on her team, and indeed on the entire Norwich force.

On her very first day of work, her team is called out to a homicide. This case will rock the foundations of Sara’s world – on both a professional and personal level.

With a small team of only four people, Sara being one of the four, manpower is spread thin to determine who the murderer is.

“Under Violent Skies” encompassed all of the attributes I admire in a police procedural. It had a good balance between an interesting crime plot and a personable and relatable protagonist. The setting was one of my favourites and complimented the story.

Neither fast or slow, yet perfectly paced for reading enjoyment. As well as Sara, whom I really became fond of, I also liked a few of the peripheral characters including the elderly farm woman Agnes, and the illegal Serbian woman, Lenka.

In addition to being a murder mystery, the novel spoke to themes of prejudice, illegal aliens, organized crime, people smuggling, and rural policing.

“Under Violent Skies” is the first novel in the DS Sara Hirst crime fiction series. I enjoyed it so much that I now have the next two in the series loaded on my Kindle.

“Under Violent Skies” has been long-listed for the Crime Writer’s Association John Creasey (New Blood) Dagger in 2021.

This review was written voluntarily and my rating was in no way influenced by the fact that I received a complimentary digital copy of this novel from Joffe Books via NetGalley. 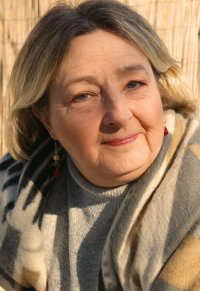 Yorkshire born, Judi Daykin has lived, worked and made theatre in Norfolk for the last forty years. She completed her MA in Creative Writing (Crime Fiction) at the University of East Anglia (UEA), and her debut novel was shortlisted for the Little, Brown UEA writer’s prize in 2019.

‘I love the beautiful, vast skies and watery landscapes of Norfolk. Our home in a village on the north coast can feel wonderfully remote, even though the nearest town is only a few miles away. I can’t imagine living anywhere better than this.’

Judi is also a working actor, and has been known to twiddle the knobs on the sound desk for the variety shows at Cromer Pier. She runs her own theatre company, Broad Horizons, specialising in commissioning new plays recovering and retelling women’s stories.

4 Responses to “Under Violent Skies” by Judi Daykin – Book Review