Posted on March 9, 2022 by Fictionophile

The fourth book in the delightful Inishowen mystery series is set in summer. The solicitor, Ben O’Keeffe is to speak at the wedding of her legal assistant and friend Leah which is to take place at the Greysbridge Hotel.

On a personal front, Ben’s long time love interest, Police Sergeant Tom Molloy has moved some seven hours away, and their relationship has not been thriving due to their busy lives coupled with the distance. Now, Ben is casually dating the new doctor in town. Work-wise, she is being tempted by a job offer in the United States. They have even procured a locum solicitor for her to man her practice whilst she is away…

Meanwhile, Ben is taking a few days away from her legal office when her assistant Leah is on her honeymoon. Also, Ben is nursing a very sore throat. 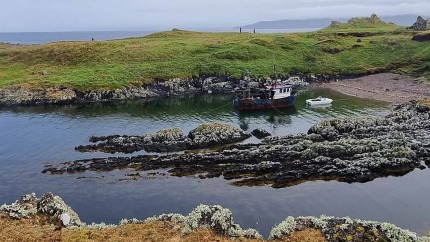 Though Leah’s wedding day has glorious weather, the festivities take a sombre turn when not one, but two deaths occur at Greysbridge.

And, in a quirk of fate, Sergeant Tom Molloy arrives on the scene to investigate…

The groom’s family have come over from a small, insular, local island to attend the wedding. They are a strange bunch… could they have anything to do with the deaths?

This is the fourth book in the Inishowen mystery series and by now I have come to know and love all the characters. I love Ben’s cat, Guinness, and was a tad disappointed that he didn’t play a larger part in this book. Though, to be fair, you would hardly take your cat to a wedding. LOL.

This installment in the series had a great mystery at its core. Long-standing family skeletons are unearthed along with the overriding theme of avarice. Ben O’Keeffe plays a pivotal role in solving the case mostly due to her overwhelming nosiness.

Greysbridge, the hotel, was an old house with a rather sordid history and was a great setting with loads of ambiance.

The ending of the book was great, making this probably my favourite book in the Inishowen series so far. Now I’m more eager than ever to read the next book in the series and already have the fifth book loaded on my Kindle.

The author is a solicitor herself, so that part of the narrative is knowledgeable and convincing. Not gritty by any means, yet somehow more serious than a ‘cozy’, this is a series that I can heartily recommend.

I received a complimentary digital copy of this novel from Oceanview Publishing via NetGalley – at my request, for my own reading enjoyment and the writing of this review.

Andrea Carter graduated in law from Trinity College, Dublin. She qualified as a solicitor and moved to the Inishowen Peninsula in Co. Donegal where she lived and worked for a number of years. In 2005 she transferred to the Bar and moved to Dublin to practise as a barrister. She grew up in Ballyfin, Co. Laois.

Fiction reviewer ; Goodreads librarian. Retired library cataloger - more time to read! Loves books, gardening, and red wine. I have been a reviewer member of NetGalley since October 2013. I review titles offered by Edelweiss, and participate in blog tours with TLC Book Tours.
View all posts by Fictionophile →
This entry was posted in Book Reviews, Mystery fiction, NetGalley and tagged Ireland, recommended reading. Bookmark the permalink.

6 Responses to “Murder at Greysbridge” by Andrea Carter – Book Review