Posted on April 7, 2022 by Fictionophile 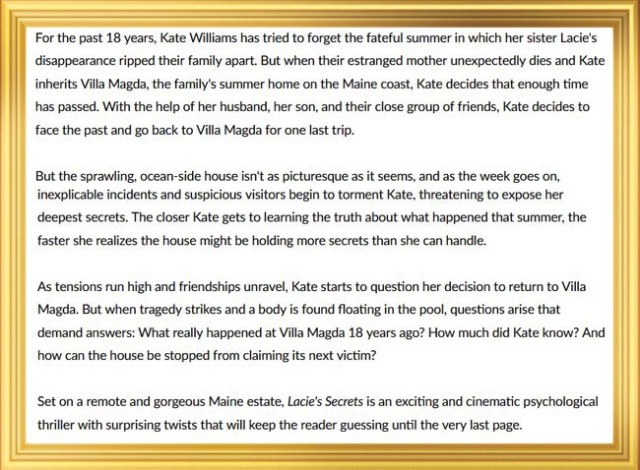 Villa Magna – a beautiful gothic, stone mansion atop a cliff in Maine overlooking the Atlantic Ocean. With a swimming pool, tennis courts, and myriad rooms with secret passages, this house would be my ideal…. only this house has a dark and tortured history which has lent it a kind of sentience… The estate’s caretakers, Susan and Doug Dresden looked after Kate’s mother for decades and they welcome Kate back with fondness. 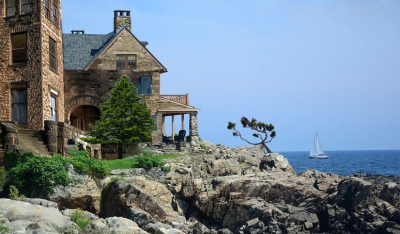 Kate Williams – grew up at Villa Magna with her sister. The magnificent house was built be her great-grandfather for her great-grandmother, Magna. Her mother has recently passed away, so she returns to the house for the first time in eighteen years. She left when her younger sister Lacie disappeared. Kate’s memories of the events surrounding her sister’s disappearance are sketchy at best. She has repressed the memories of that traumatic time, but now, back at Villa Magna, her memories are starting to return.

Along with those memories, danger lurks and tensions run high. Kate doubts herself, and becomes suspicious of those she holds dear. It would seem that everyone has secrets, none more so than the long lost Lacie herself.

This is my second book by this writing duo and I enjoyed this one marginally better than the last.

I adored the setting, but found the plot a tad predictable. To me, it felt almost like a YA read, and the cover reaffirms my opinion. I figured out, quite early on, many of the ‘surprise’ plot twists.

The character of Kate was quite well developed, but the other characters could have been described better, especially Kate’s husband Charlie.

The way the narrative gave sentience to the old mansion felt contrived, and repetitive.

I think this is a novel that would be better as a TV movie, than as a book. The setting was certainly ‘eye candy‘ material, and the plot was often titillating.

This was a cold case mystery, and a thriller with gothic vibes and plenty of supernatural elements. Not a deep read by any measure, though perhaps enjoyable if in a receptive mood.

This review was written voluntarily and my rating was in no way influenced by the fact that I received a complimentary digital copy of this novel from Beaufort Books via Edelweiss.