“In The Silence” by M.R. Mackenzie – Book Review

Posted on April 9, 2022 by Fictionophile 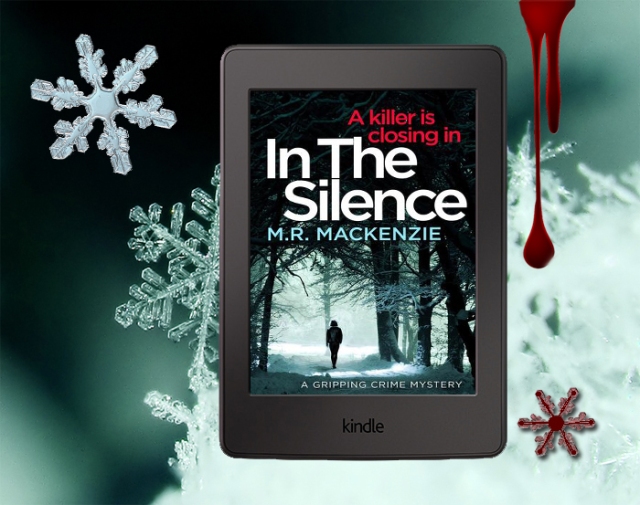 Anna Scavolini is an academic who works in Rome as a university lecturer and holds a doctorate in feminist criminology. Born and brought up in Glasgow, Scotland she left for Rome after she left school. Anna is short, single and in her early thirties. She seems very estranged from her mother and she rarely keeps in touch with even her best friends. Anna takes prescribed Lithium to treat her bipolar disorder.

To break her habit of being a loner, and at the repeated behest of her old school chum Zoe, she flies back to Glasgow to celebrate Zoe’s birthday. It is a snowy Glasgow December…

She encounters Andrew Foley, an old crush, in the nightclub where Zoe is having her birthday bash. They talk a while, then he disappears. Several hours later Anna finds his bleeding body in the Kelvingrove Park. He dies in her arms.

Thus begins a police investigation into Foley’s murder. Anna is interrogated by the police and they confiscate her passport. So, as she is unable to fly home, she figures she might as well do a little investigating of her own…

I’ll admit it took me quite a while to warm to Anna Scavolini. Likely in part to the fact that she doesn’t want people to warm to her. She has very few people in her life and that is the way she seems to prefer it.  She abandoned her Jewish faith along with her family. Even though she was back home in Glasgow, she made zero effort to contact her mother.

I thoroughly enjoyed the rapport between Anna and her old school friend Zoe, though even in this relationship she seems to be holding back.

I appreciated the writing. “His wasn’t an unkind face, but it didn’t look like the sort that did much smiling.”

The crimes themselves were disturbing – almost as disturbing as the event that precipitated them.

The wintery Glasgow setting was expertly described and made vivid to the reader. The author’s affection for his home city was very apparent.

Anna’s actions sometimes stretched the bounds of credibility. Why would she invest in this case? What had she to gain? She took some crazy risks, which I think were below a woman of her experience and intelligence. I couldn’t understand her dislike of the police, which seems more ingrained that the situation warranted.

The denouement of the novel was highly satisfactory, though quite tense and emotionally draining. This is a debut novel and the first in a Tartan Noir crime series featuring Dr. Anna Scavolini. I have the second novel in the series loaded on my Kindle and I’m looking forward to her development as a character.

This review was written voluntarily and my rating was in no way influenced by the fact that I received a complimentary digital copy of this novel from Bloodhound Books via NetGalley. My apologies to the author for letting this excellent debut novel linger on my TBR for FAR too long…

The Kindle format of “In The Silence” is now available for FREE! Get your copy today!

M.R. Mackenzie was born and lives in Glasgow, Scotland. He studied at Glasgow University and has an MA in English and a PhD in Film Studies.

In addition to writing, he works as a Blu-ray/DVD producer and has overseen releases of films by a number of acclaimed directors, among them Dario Argento, Joe Dante, Hideo Nakata and Jacques Tourneur. Writing as Michael Mackenzie, he has contributed chapters to books on cult cinema and regularly provides video essays and liner notes for new releases of celebrated films. He used to work in a library, before leaving to spend more time with books.

In 2019, his first novel, In the Silence, was shortlisted for the Bloody Scotland Scottish Crime Debut of the Year and longlisted for the McIlvanney Prize. His third novel, The Library Murders, was featured in Crime Time’s Best of the Year 2020 list.

6 Responses to “In The Silence” by M.R. Mackenzie – Book Review