2018 –  Catherine Christophe is 47 years old and works as a very successful barrister in London. She is a workaholic, is happily married and is the mother of two teenage children. Catherine seems haunted by a mysterious event from her past, and is loathe to discuss anything about her childhood, or her family. Her husband thinks she is working too hard so plans a weekend away for her to celebrate their wedding anniversary. Catherine though disappears from the train station shortly before they are to depart.

1989 –  Janey Lestrange – had a loving father, who she has recently lost. Her mother is now married to another man, and never really showed Janey any true affection. The year she is eighteen she spends the summer with the Hunter family at Vanes, their old family ‘pile’ in Somerset – a place she visited as a child with her father. What happens that summer of 1989 has ramifications that reach into the present.

The Hunter Family – Eccentric, to put it mildly – abnormal to tell the truth of it. The males in the family have a strong sense of superiority over the women. The mother, a textile designer, is the driving force of the family, yet she seemed cowed by her husband’s demands. Sylvia seemed to live a life of quiet desperation. Catherine (Kitty) is the twin of Joss, and she vows that as soon has she celebrates her eighteenth birthday she will escape the confines of her parents and Vanes.

The Vanes – a centuries old house in the Somerset countryside near the sea, and situated at the edge of Exmoor near the Devon border. It has been in the Hunter family for hundreds of years. It is a charming old pile with gables shaped like beehives, an inground pool, an a weathervane of father time atop its peaked roof.

The Collecting – an ancient, pagan, family ritual in which honey is collected from a hexagonal shaped old chapel ruin on the grounds. For centuries the bees have gone about their business using the old chapel for their hives. The Collecting ritual takes half of the honey for the family, and leaves half for the bees to sustain them through the winter.

After reading and loving this author’s “A Place For Us“, I had high expectations that I would love this book as well. My expectations were unfounded.  I expected a warm family saga, yet it was more an unsettling, over-long thriller.

The setting was perfection, but the plot was meandering, slow, and confusing. I wanted so much to get into this novel, yet it didn’t really hold my attention as I expected it to.  The Hunter family were eccentric, yet not in a good way. The patriarch, Charles Hunter gave off a odious, supercilious, and somewhat lecherous vibe. The only two characters that I really cared for were Janey Lestrange and her father Simon Lestrange. Janey’s story had an almost dreamlike quality. Her relationship with the Hunter’s son left me feeling uncomfortable… Simon’s narrative was more grounded and described how deeply damaged he was by his experiences in the war.

I enjoyed the triple timeline, I quite like a saga with some back and forthing. I enjoyed the history of the old family house, and the ancient honey collecting rituals associated with it.  These though, were a bit repetitive which mired down the plot.

I predicted the ending way ahead of time, though I didn’t know the logistics of how it would come about.

I did enjoy the writing, but felt a distinct disconnect to most of the characters and the plot. I liked the way the author subtly disparaged class snobbishness. Also, her story emphasized how outward seeming perfection can harbour a nasty, rotten underbelly. It told of family dysfunction and the lengths some people will go to escape.

Given that I have really enjoyed other works by this author, I would definitely read more of her work, though this time, I wasn’t enamored with the book. Still, though, this book has been very positively reviewed by many readers whose opinions I respect and the ending proved satisfactory. Give it a try and see, it might just be the perfect read for you.

This review was written voluntarily and my rating was in no way influenced by the fact that I received a complimentary digital copy of this novel from Grand Central Publishing via NetGalley.

This title will be published by Grand Central Publishing tomorrow, May 10, 2022 and is available to pre-order now! 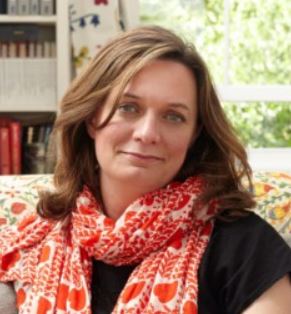 Harriet Evans is the internationally bestselling author of Going Home, A Hopeless Romantic, The Love of Her Life, I Remember You, Love Always, Happily Ever After, Not Without You, A Place for Us, The Butterfly Summer, The Wildflowers. She lives in London. Visit her website at Harriet-Evans.com.

4 Responses to “The Beloved Girls” by Harriet Evans – Book Review