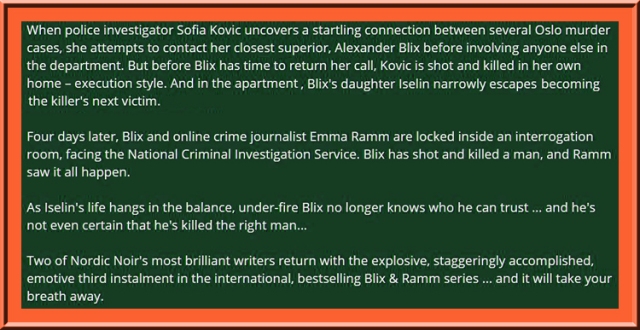 This police procedural, set in Oslo, Norway, is the third to feature policeman Alexander Blix and blogger/journalist Emma Ramm.

Blix is 48 years old and a Detective Chief Inspector of the Homicide division of the Oslo police. Shortly after his career began he was involved in a fatal shooting that has now become part of the police academy’s syllabus.  Since then, his partner at the time, Gard Fosse, has risen through the ranks and is now Blix’s boss. While Fosse is a ‘by the book‘ type of policeman, Blix is more ‘by the gut‘. Blix is not ambitious for career advancement because he loves the investigative side of his work and would hate to leave that for a desk job.

Blix’s work partner, Sofia Kovic, is twenty-seven years old and has only been working with Blix for just over a year.

Iselin Skaar, Blix’s daughter, is twenty-three and has recently began studying at the Police College.

Emma Ramm is in her late twenties. A celebrity blogger/journalist for news.no, she has ties to Alexander Blix. Ties that make Blix feel somewhat responsible for her. Emma is an interesting character in that she keeps herself to herself and has a medical condition that she hides from everyone except her sister.

It was great catching up with the protagonists of this outstanding crime series for a third time.

In this installment, Blix’s partner Sofia Kovic is murdered, execution style, in her apartment. Blix’s daughter, who rents a room from Sofia, was also injured from the gunman but escaped. Sofia had been trying to reach Blix by phone shortly before she was killed…  Because of Blix’s close connection with both Sofia and Iselin, he is told that another detective, Abelvik, will lead the case.

We jump forward four days. Iselin, Blix’s daughter, is fighting for her life in hospital. Blix is being interrogated by internal affairs for his fatal shooting of Timo Polmar.

What could have caused Blix to break so many rules and jeopardize his career? He didn’t know the man he shot and is even uncertain he shot the right man. AND, Will Iselin pull through?

The book covers some fascinating themes such as parental guilt, corruption, abduction, and grief. The characters wonder ‘what if’ they had made different, better, choices. We are made to realize once again that one impetuous decision can alter the course of a life. The consequences of some actions are irreversible.

Ingenious plotting, formidable tension, and great characterization mark this novel as a crime thriller a worthy read. All in all, this is an outstanding crime series which I shall follow avidly.

Relationships are shattered, and tested in the most profound ways. The denouement was both suspenseful and included a cliffhanger which makes me wonder… just how are these authors going to write a follow-up to “Unhinged”?

“Unhinged” is an absorbing and engrossing crime thriller that I can highly recommend to all fans of the genre.