“The Vanishing of Margaret Small” by Neil Alexander – Book Review

Posted on December 15, 2022 by Fictionophile

At times a heart-wrenching read, “The Vanishing of Margaret Small” was an astounding debut novel. Based upon interviews with ‘people with learning disabilities’, the author has created a fictionalized tribute to those people, while also reminding us of the dire treatment of these individuals just a few short decades ago.

While reading, I wondered if Margaret was really as ‘slow’ as they made her out to be. If her grandmother had shown her any real love and guidance perhaps she would have learned to read and write. Though, the sad truth was that the grandmother’s getting rid of Margaret as an unwelcome reminder of her daughter’s transgressions seemed inevitable in a way. The sadistic treatment of the patients at the long term care institution was distressing to read. Margaret lived there from the age of seven until she was forty-one years old! All the while being told she was incapable of learning – and she had no schooling.

Now, at age 75, Margaret is still illiterate, but gets by living alone in her flat with the aid of a support worker named Wayne. She loves listening to audiobooks on her discman, wandering around the streets of her beloved Whitstable, and she is an ardent fan of the singer Cilla Black. Her predictable life is shattered when she begins receiving letters from someone named ‘C’. The letters usually contain £50 and urge her to ‘treat herself’. Margaret is mystified as to who could be sending these letters.

When reading, the locations mentioned were very vivid to me – largely in part to the fact that just last week I binge-watched the second season of “Whitstable Pearl” on Netflix.

This poignant story tells of people whom life has denied any of the advantages that we take for granted today. People with few or no choices about their own lives. It speaks to the unfairness of life, while simultaneously being hopeful thanks in no small part to Margaret’s naivety and positive outlook.

I would definitely read another book by this author. Recommended!

This review was written voluntarily and my rating was in no way influenced by the fact that I received a complimentary digital copy of this novel from Embla Books via NetGalley UK. 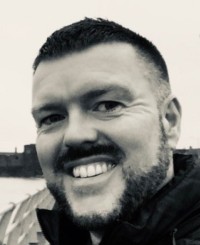 Much of the inspiration for Neil Alexander‘s debut novel, ‘The Vanishing of Margaret Small‘, came directly from the voices of people with a learning disability, and the incredibly moving first person accounts of living in long stay institutions, which he heard while working for the UK charity Mencap. Neil, who has a Masters degree in English Literature from the University of Kent at Canterbury, began his career working in health journalism. Originally from Northern Ireland, he now lives in the seaside town of Whitstable in Kent. He currently teaches English part-time and is working on his second novel.